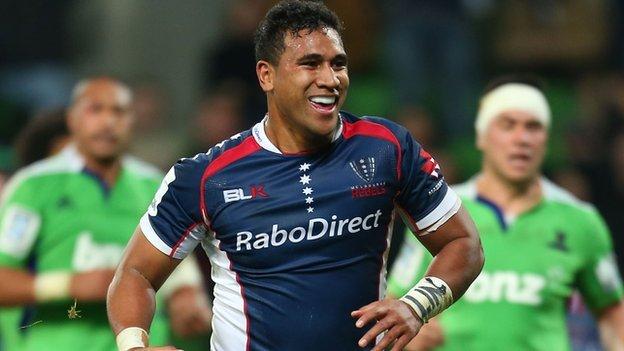 Vuna, who replaces Tom Biggs, is one of four changes as boss Dean Ryan responds to last weekend's record-ending 23-21 defeat in Jersey.

Ryan Lamb returns at fly-half, while Jonny Arr comes in for Charlie Mulchrone at scrum-half.

And Argentina international Leonardo Senatore is recalled to the back row.

After seeing their club record 24-game winning run ended, Worcester are now on course to be runners-up when the regular season concludes - unless they beat Bristol at Sixways on the final day on 25 April.

If they do finish second, then Warriors would be most likely to face Scottish, who are currently third, 13 points ahead of fourth-placed Nottingham, and that makes this Saturday's game a potential dress rehearsal.

Warriors sit three points behind Bristol, 22 points ahead of Scottish, having won 16 of their 18 league games.

They won the first-ever league fixture between these sides, 34-19 in December, although Worcester were reprimanded for not telling Scottish they were wearing Global Positioning System tracking devices under their shirts, to let coaching staff know how far players have run during a game.

Scottish number eight Mark Bright, who bagged a brace of tries that day, remains a danger as the Championship's leading scorer with 21.

If Nottingham and Rotherham fail to win this weekend and Scottish won at Sixways, the Exiles would book their place in the top four with three rounds to spare.

"London Scottish are a good side who are building well and look like a serious threat for the play-offs.

"They'll be looking at creating a really difficult environment at their ground come May and seeing if they can get something out of that and then everything is up for grabs.

"We've been in cup final situations pretty much every other weekend. That deserves some credit for us to be able to work our way through those situations in tough weather conditions.

"In the Championship you play against sides who know the competition and you don't - it's a tough challenge."