Sale Sharks need to win all four of their remaining Premiership games to finish in the top six, according to director of rugby Steve Diamond.

After beating Gloucester on Sunday, Sale remained seventh in the table, one point behind sixth-placed Wasps.

Sharks face London Irish, Harlequins, Newcastle and Exeter, knowing a top-six spot will earn them a place in next season's European Champions Cup.

"I think we've got to win all the games to finish sixth," said Diamond, 46.

"If we finished seventh, I don't think we're guaranteed that because there are four English teams in the quarter finals of the Challenge Cup," he told BBC Sport.

"All we can do is do what we're doing. If we come out of the season with 14 wins and we don't finish sixth you can't say we haven't tried our best. 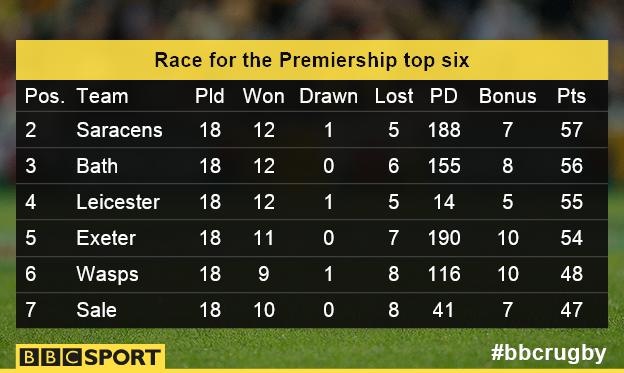 "If you look over the last four years we've finished sixth, winning 10 games three years ago.

"Last year, we finished sixth winning 12 games and we're going to have to win 14 games this year - it just shows you how strong the competition is."

If Sale did finish seventh they would face a play-off game to get into the Champions Cup against whoever finished eighth in the Pro12 - and the winner of that fixture will then face a home match against the seventh-placed team from France's Top 14.

However, if an English team wins the European Challenge Cup this season they would take the place of the side that finished seventh in the Premiership.

Diamond has also revealed that defence coach Mike Forshaw and forwards coach Pete Anglesea have taken on some of the duties of Bryan Redpath after his move to Yorkshire Carnegie.

"Mike has taken on a bigger role and Pete's taken a bit of Mike's role," he added.

"We're having a look around for an attack coach who can come in and add to the coaching team - we understand that the higher skill set we have, the better we will be."