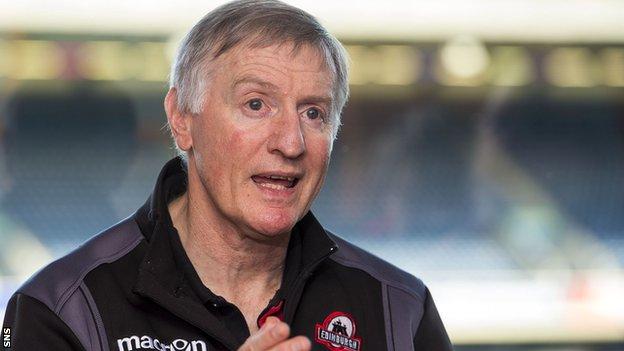 Alan Solomons has urged his Edinburgh side to make the most of what he considers a great chance to reach the European Challenge Cup final.

"It is hugely exciting," head coach Solomons told BBC Scotland. "To get into a home semi-final in European competition is absolutely fantastic.

"We'll have another marvellous opportunity at Murrayfield."

Edinburgh had to overcome English Premiership side London Irish away from home to reach the last four, while Dragons continued their own impressive run by defeating Cardiff Blues.

Solomons hopes his side can make home advantage tell on 17 April.

"Our goal was to make the play-off in this competition and that would create the opportunity for us to progress and we took that opportunity.

"I'm hoping we're going to have a massive crowd out at Murrayfield to support us."

Edinburgh won their the only meeting with Dragons this season, 24-10 at Murrayfield in October, and have since shown an improvement in form after a poor start to the campaign.

"I've always been privileged to coach teams that have had a good team spirit, but this one is absolutely exceptional," said Solomons.

"We've had many challenges this season and we've risen to each and every one and I can't speak highly enough of all the players in the squad."

Edinburgh, who are two places and 11 points above Dragons in the Pro12 table, survived late pressure by London Irish to claim victory in Reading.

"It was certainly a heart-stopping affair," added Solomons, who suggested that his side had been benefiting from "strength in depth".

"The first 20 minutes, we dominated and then, from the 32nd to the 52nd minutes, they put the points on the board and they dominated.

"We needed to swing that momentum a little bit and I think that try Fraser McKenzie got was absolutely key, but London Irish kept coming and it needed some stout defence at the end to hold them out."