Wales and British and Irish Lions number eight Taulupe Faletau has indicated that he expects to remain at Newport Gwent Dragons.

But the 24-year-old admits that negotiations are still continuing behind the scenes.

"What it's looking like to me is I'm going to be here, but the rest is up to agents to sort out," Faletau said.

Faletau has said he has been offered a national dual contract but wants things concluded "as soon as possible". 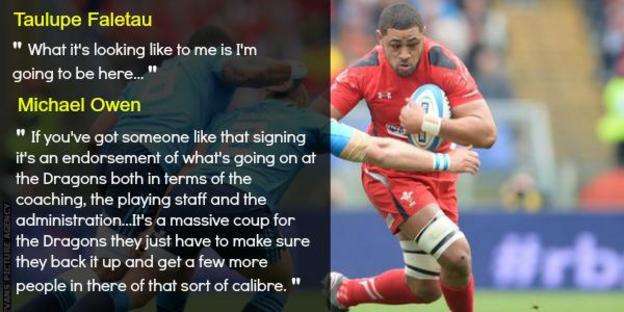 The back-row - who has another year left on his current deal - has been linked with a move to English Premiership side Bath, but was effusive about the progress Dragons have made this season.

"I think there's the right balance there with more experienced guys and then you get the exciting young talents such as Tyler Morgan, Hallam Amos, Jack Dixon, Tom Prydie, all of them.

"So I think we're starting to build a team that's the right balance to take us forward and get the results."

Dragons beat Pro12 title holders Leinster on Sunday after being 22-8 down with 30 minutes remaining.

The win against Leinster was the Welsh region's fourth consecutive victory in all competitions, and the first time they have done the double over the Irish province.

That good form has also seen Dragons reach the semi-finals of the European Challenge Cup, where they will face Edinburgh on Friday night.

A win at Murrayfield will set up a final against either Gloucester or Exeter, who contest the other semi-final on Saturday, and put Dragons within touching distance of silverware.

"It would be something special for myself, just through coming through here at the Dragons," Faletau added.

"They took me on at the start and we're a close bunch of boys here too, so we want to do well for each other."