But Tom Savage and Jonny May crossed in the final 10 minutes - either side of Elvis Taione's effort - to see the Cherry and Whites into the final at The Stoop to face Edinburgh on 1 May.

Exeter are 20 points ahead of Gloucester in the Premiership, but it was the Kingsholm side that looked the most adventurous, and they should have been out of sight before half-time. 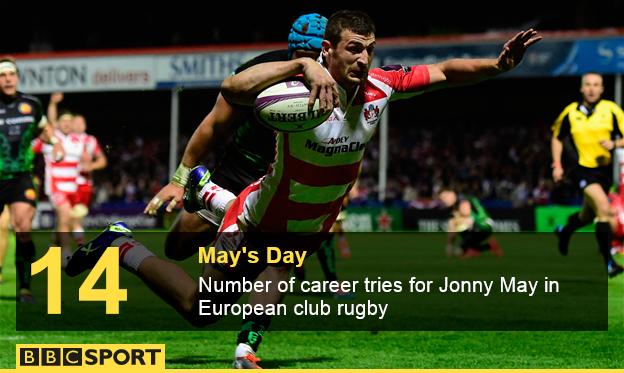 While the Chiefs may have designs on grasping a play-off place, this was a rare opportunity to reach a first European final in the club's history, and it took until after the break before Rob Baxter's side put concerted pressure on the Gloucester 22.

It was the Cherry and Whites who came out strong at the start, but despite going through the phases and some tidy possession, the Exeter try-line was rarely threatened.

Hook then landed a 50-metre penalty, before Slade scored nine unanswered points with the boot to bring Exeter to within touching distance midway through the second half.

Gloucester's pack had overawed their opponents for much of the game though, and eventually their power proved too much when Savage plucked a loose ball from a driving maul to cross.

It seemed like it might be enough, but Taione scrambled the ball down to give Exeter hope, only for May to capitalise on loose Exeter hands and sprint away for the conclusive try.

"We've talked about what's going on behind the scenes not always being reflected in team results, but I thought tonight was the first time all year we produced a really really good performance, from the first minute to the last. That was reflected in the scoreline.

"We know to win games against one of the top four teams in England we've got to be right on our game, every aspect of our game.

"Our set-piece was good all though the game, our kick-chase was good, our defence was good, and we actually played with some ambition, so all the things that are necessary for us as a squad to win those big games were there.

"They (the supporters) could easily have become a little bit disillusioned, at different stages this season, with our performances, but they've stuck right behind us, so for what they've given us throughout the season, we're delighted to be able to give a little bit back."