The Cherry and Whites, winners of the competition in 2006, beat Exeter in the semi-final at Kingsholm on Saturday.

Under David Humphreys, Gloucester have struggled for consistency this season, sitting ninth in the Premiership with seven wins from 19 matches.

"It means everything. It means we've got something to play for," said May.

Tries from Billy Meakes, Tom Savage and 25-year-old England winger May set up an eye-catching victory in front of a packed Kingsholm, booking Gloucester's place in a European final for the first time in nine years.

The club have had a mixed campaign following Humphreys' summer arrival as director of rugby, being hammered 53-6 by champions Northampton Saints on the opening night of the season but also recording memorable wins over Leicester Tigers and Saracens.

"The nature of the Premiership means any team can beat any team on any given day," May told BBC Points West," and, even though we're ninth, it's only a few wins here and a few wins there.

"We're not too down on ourselves. We know we're a team that's moving in the right direction and still learning and improving." 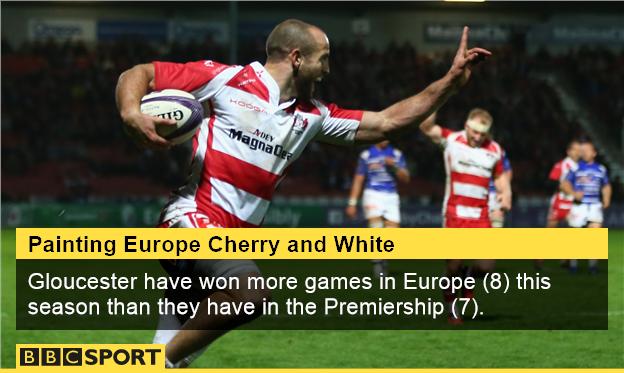 The 43-year-old ex-Ireland fly-half concedes that his side have had another "up-and-down" campaign, but believes beating Edinburgh in the Challenge Cup final on 1 May would "lay the foundations" going into next term.

"We've been disappointed by our league performances, we believe we're a much better team than that and our performances in Europe have reflected where we see ourselves," he said.

"We've talked since I've been here about the potential of this club, both on and off the pitch, but we have to deliver against that potential.

"Winning the Challenge Cup will go some way towards rewarding the hard work that has gone in this season and it'd lay the foundations and give us confidence going into next year."