Sam Burgess put in a man-of-the-match display as Bath beat London Irish to move up to second in the Premiership.

George Ford kicked four penalties for the hosts but the Exiles led at half-time thanks to Tom Court's touchdown.

However, tries from Leroy Houston, Jonathan Joseph and Matt Banahan after the break re-established Bath's lead.

Cross-code star Burgess, playing at flanker, then went over for the bonus-point try, before Semesa Rokoduguni and Blair Cowan traded late scores.

Burgess, who started in the pack for the first time in Bath's win over Newcastle Falcons a fortnight ago, was again impressive in both defence and attack, and capped his eye-catching performance with a third Premiership try.

The bonus-point win moved the Blue, Black and Whites back up to second in the table, five points clear of third-placed Saracens, who take on leaders Northampton Saints on Saturday. 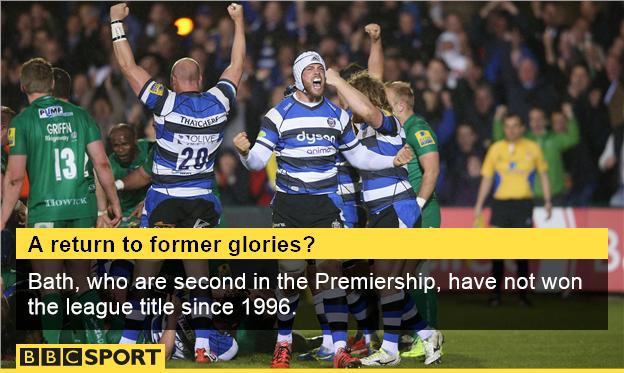 The home side looked in control when England fly-half Ford kicked them into a 12-3 lead inside the opening half an hour, but Chris Noakes kept the Exiles in touch from the tee before prop Court bundled his way over to put them ahead at the break.

But, with Bath needing a victory to keep up their hopes of finishing in the top two and subsequently securing a home semi-final in the play-offs, Mike Ford's side produced a devastating 15-minute blitz that resulted in four tries, leaving the visitors trailing in abject pursuit.

First Houston forced his way over after some powerful scrummaging from the home pack, before centre Joseph produced a brilliant mini chip-and-chase to score Bath's second try.

A sweeping move, which started at the hands of Irish scrum-half Peter Stringer and ended with Banahan crossing in the corner, then stretched their advantage further, and 26-year-old Burgess touched down at the bottom of a rolling maul for the bonus point.

Rokoduguni added a fifth try, capitalising on Ford's cleverly taken tap-penalty, before Cowan ran in a late consolation try for London Irish, who remain 10th in the table with two rounds of fixtures left.