Former Wales full-back Lee Byrne has retired after failing to recover from a shoulder injury.

The Newport Gwent Dragons captain, 34 returned to Wales from Clermont Auvergne for the 2014-15 season, but underwent surgery in November.

"I'm frustrated to be in this position, but happy to have fulfilled all my rugby ambitions at both club and international level," he said.

Byrne's last Wales appearance came as Wales beat Fiji 66-0 at the 2011 World Cup in New Zealand. He also won a British and Irish Lions cap in South Africa in 2009.

The former Scarlet and Ospreys player added: "I have made terrific friends and have had incredible experiences.

"I would also like to thank [director of rugby] Lyn Jones for making me the Dragons captain.

"I'm glad I had the chance to play a small part in this season's success and its great to know that I am leaving with the region on a high, with such good things to come." 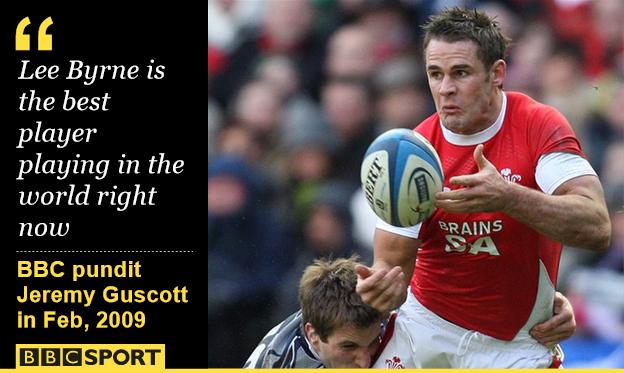 Jones was saddened by Byrne's decision, describing him as "a fantastic rugby player" and "a great influence on many of our younger players".

"I was in a pub in Neath watching Scarlets play out in France and I remember him kicking and I couldn't get over how far he was kicking the ball," Jones told BBC Radio Wales.

"I phoned [backer] Mike Cuddy up and suggested to Mike 'I think we've found our next full-back' that we needed at the time and we recruited Lee [in April 2006] to come and play for the Ospreys.

"And he was excellent for us and a very popular member of the squad.

"He had really good angles of running when he hit the line.

"He could really see a gap early."