Scarlets climbed back into the Pro12's top six as they beat Newport Gwent Dragons with a clinical display in front of a record crowd.

Tyler Morgan's try put Dragons in front, before Scarlets burst into life at the end of the first half.

A controversial Ken Owens score and Scott Williams' spectacular team try gave them a 17-10 lead at the interval.

With Edinburgh winning against Zebre with a bonus point on Friday, Scarlets needed to beat Dragons and score four tries to reclaim their top six place.

They accomplished that task with relative ease and in front of a record competition crowd of 52,762 in the second of two Judgement Day matches at Millennium Stadium.

In doing so, Scarlets kept alive their ambition of automatically qualifying for next season's European Champions Cup while ending Dragons' faint hope of doing the same.

Aiming for a fourth successive league win for the first time since November 2004, Dragons were mathematically capable of finishing in the top six, but had to beat Scarlets and win their remaining two games handsomely.

Dragons director of rugby Lyn Jones had said prior to the match that Judgement Day was an opportunity for players to stake their claims for a place in Wales' World Cup squad.

Young backs Hallam Amos and Tyler Morgan have both been tipped as Test regulars of the future, and it was the latter of the burgeoning duo who scored the game's opening try.

Inside centre Jack Dixon carried powerfully and, although his offload to Morgan looked close to being forward, his midfield partner sped over to touch down. 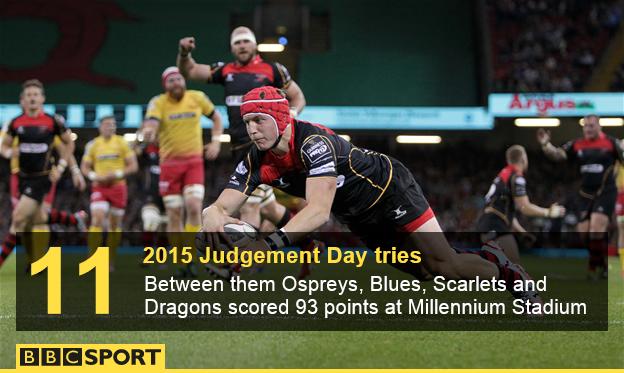 With that try coming between a penalty apiece for both sides, Dragons led 10-3 as the first half neared its end.

But the game was turned on its head as Scarlets scored 14 points in five scintillating minutes.

Wales hooker Owens sparked the purple patch as he barged over from close range, albeit with referee George Clancy seemingly impeding some of the Dragons' would-be tacklers.

If their first try was fortuitous, Scarlets' second was pure brilliance.

Full-back Liam Williams chipped over an on-rushing defence inside his own half, gathered smartly before arrowing towards the Dragons' line and offloading to his namesake Scott, who cantered over for a slick score.

Scarlets began the second half as they ended the first, Liam Williams turning from architect to finisher as he weaved his way past some meek Dragons tackling for the west Wales region's third try.

A Rhys Priestland penalty extended their lead to 24-10.

And, with a little over 20 minutes left, the fly-half fed wing Robinson to cross in the corner for the bonus point try.