Leigh Halfpenny said it was "a privilege to have been part of creating history" after helping Toulon win a third European Champions Cup.

The Wales full-back scored 14 points as his side beat Clermont Auvergne, who had fellow countryman Jonathan Davies at centre, 24-18 at Twickenham.

"I don't think it will sink in for a long time," Halfpenny said.

And the former Cardiff Blues player's goal-kicking at Twickenham was as important to Toulon's win as Wilkinson's had so often been.

Afterwards Halfpenny, who has won two Wales Grand Slams and a British Lions series, said: "It is up there [with the highlights of my career]. This was a goal to retain our title and create history to win the European title three times in a row.

"To be fair to Clermont they threw everything at us.

"It's what it's all about. This is where you want to be, involved in games like this, and what a performance from the boys. 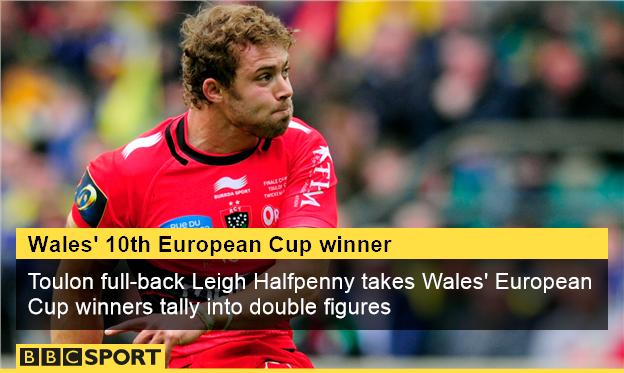 "The character they showed to keep Clermont out right at the end was just incredible."

Clermont went into an 11-3 lead only for Toulon to strike back.

Davies, who joined Clermont from Scarlets before the 2014-15 season, said: "It was our mistakes that let them back in... they didn't beat us as such, we let them in the door.

"They're a team of winners. They've come from all parts and they've all won whatever competitions they've been a part of.

"To win two European championships before and now their third, it shows they're a quality team and you can't give them easy opportunities like that."