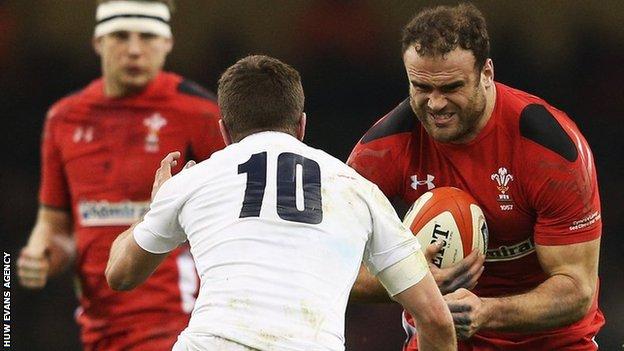 Under the so-called 'Gatland's Law', Wales-based players are likely to be favoured for Test selection over those who choose to play elsewhere.

Roberts has agreed terms with Quins, rejecting a return to Cardiff Blues.

"It throws into question how important Gatland's Law is to players who decide to play outside Wales," said Jones.

In August, 2014, the Welsh Rugby Union and Wales' four professional regions signed a £60m, six-year deal that settled a long-running dispute over the sport's future.

That deal included rules that mean players based outside Wales could also be overlooked in favour of home-based talent, with coach Gatland expected to tighten selection policy.

The selection policy ruled that no player based overseas should represent Wales, although Gatland is able to make exceptions.

Players based outside Wales at the time the deal was done were exempt from the new selection rules while their contracts run.

Roberts' move to Quins in England could test the resolve of those charged with imposing those rules, even though the British and Irish Lions centre, 28, was playing abroad in France when the rule was originally imposed.

Former Wales flanker Jones told BBC Radio Wales: "There are many clauses, I understand, in the Gatland's Law-type situation which may apply to Jamie.

"But ultimately if the Welsh Rugby Union (WRU) and Warren Gatland want to make a statement and say if you choose not to play in Wales, then you're not going to be part of the Welsh rugby team.

"Scott Williams [Scarlets and Wales centre] is a wonderful rugby player, who could easily fill that void so it's not as if we haven't got a replacement.

"But Jamie is such an integral part of the way Warren Gatland plays the game, he's going to be part of the Welsh team in the [2015] World Cup.

"And I think therefore if it applies to Jamie, why can't anyone else leave Wales will be the question they'll all ask."

Scarlets fly-half Rhys Priestland has admitted his Wales career could be affected after he joins Bath ahead of the 2015-16 season.

Jones and Roberts share a medical background away from rugby and the former Wales captain says the Lions player is "ambitious" and "wants to travel the world and experience new cultures".

"He's keen, I know to re-establish his medical career and was even hoping to do something in Oxford and maybe tie up with Harlequins with that," added Jones.

"But I am not surprised that he didn't come back to Wales.

"I know that the Blues and the Welsh Rugby Union were trying hard to get him back.

"I think everyone would like to see our best players in Wales and not having Jamie in the regional game obviously weakens it to some extent.

"But I can't say I'm disappointed. I want what's best for Jamie.

"I know him personally and I hope that he gets what he wants out of this decision."

Beyond his time at Quins, Jones believes Roberts could move to a team in Japan or the southern hemisphere.

"Rugby's a wonderful opportunity and passport for him to do that," said Jones.

"He'll have a wonderful career to look back on no matter what he decides to do."