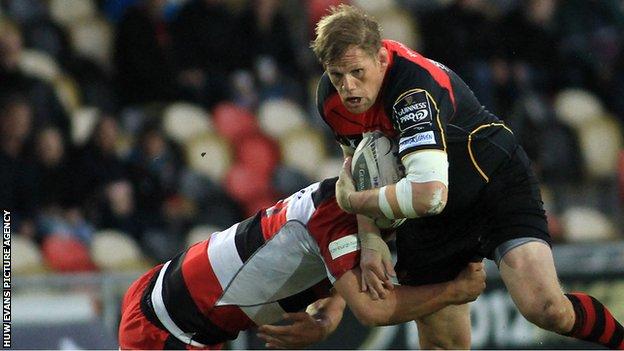 Dragons edged a scrappy first half as two Jason Tovey penalties and one from Tom Prydie put them 9-0 in front.

Edinburgh stay seventh in the Pro12, giving Scarlets the chance to claim sixth place on Sunday.

The west Wales region are one point ahead of Edinburgh and will secure their place in next season's Champions Cup if they beat Cardiff Blues in their penultimate game of the season on Sunday.

Dragons were already out of Champions Cup contention but, having been thrashed 45-16 by Edinburgh in the Challenge Cup semi-finals three weeks earlier, the Gwent region had earmarked this rematch as an opportunity to gain revenge.

They appeared to be fuelled by a motivation to exorcise that Murrayfield mauling as they made a strident start at Rodney Parade.

The hosts' pressure did at least produce some points, with two Tovey penalties putting them 6-0 ahead.

Edinburgh were unable to assert themselves in a disjointed first half, as Dragons defended tenaciously and went into the interval 9-0 up thanks to a Prydie penalty.

The home side continued to dominate after the restart, again using their potent rolling maul which this time produced a try.

Edinburgh prop Willem Nel was sin-binned for trying to bring one Dragons maul down illegally and, when the hosts' set-piece clicked into gear from the next line-out, replacement hooker Gustafson was on hand to dive over.

Faced with a daunting 16-0 deficit, Edinburgh poured forward to keep alive their fading Champions Cup hopes and they did manage a late try as captain McInally plunged over in the corner.