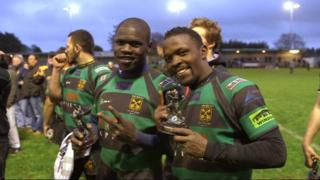 Scrum V presenter Ross Harries catches up with the two Ugandan rugby players who claimed asylum after coming to compete in the 2014 Commonwealth Games in Glasgow.

It was not long before the club's coach, former Wales international Mark Ring, spotted the new talent on his doorstep and the pair were signed up.

The sevens specialists have been granted asylum for the next five years - plenty of time for Ring to turn them into 15-a-side players!

See more on Scrum V, most Sundays on BBC Two Wales, bbc.co.uk/scrumv and on the iPlayer.