Ulster coach Neil Doak is hopeful of mounting a strong defence in the appeal against Iain Henderson's red card.

The flanker was dismissed late in Ulster's 23-23 draw with Munster and will appear before a disciplinary hearing in Wales on Wednesday.

Ulster are awaiting the exact charge from the Citings Committee with Doak adamant Henderson showed no malice to "clear anybody out with his head".

"We have a few bits and pieces we're looking at in defence of that."

Henderson could be banned for the rest of the season - Ulster will play Glasgow Warriors on Saturday and have a Pro12 semi-final on 22/23 May.

The province lie fourth in the standings and victory at Scotstoun this weekend, in the final round of games, could leave Doak's side with a home semi-final.

Victory in the semis would take Ulster to the Grand Final on 30 May at Kingspan Stadium in Belfast. 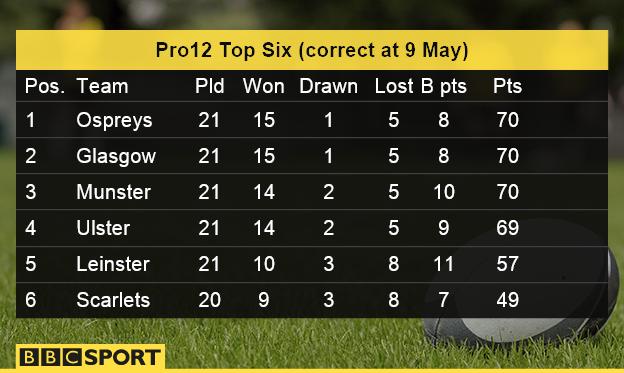 "The breakdown is a confrontational area and he [Henderson] didn't show any malice to go in and clear anybody out with his head," Doak said.

"We'll wait see what comes through from the hearings point of view and what it's put down as.

"We won't know until the statement is made on their front. Ultimately, we will have to wait and see what the Citings Committee come up with and how we deal with that."

Doak said there are "a few sore bodies" from the bruising draw with Munster, with Ulster snatching a late draw when Paul Marshall's stoppage-time try was converted by Paddy Jackson.

The coach is encouraged by the improvement in Craig Gilroy's fitness after the in-form wing, who has scored 11 tries this season, sat out the Munster game with a hamstring injury.

"He is still doing a little bit of spring work and lateral work on the calf, and he is a lot better than he was.

"It will wait and see how he reacts to a tougher workout this morning.

"He has been one of the standouts this season and has scored some great tries, so if we have him on the paddock this weekend he'll definitely be able to open up some Glasgow defence and give us some opportunities."