Cross-coder Sam Burgess says he "can offer more" at flanker for Bath, but is unsure how the change of position will impact on his England prospects.

The 26-year-old, in his first season in rugby union, started out in the centres before moving to flanker last month.

"I think the way the two teams play is certainly different," he said. "In our system at Bath playing at six gets the most out of me and works for the team.

"But how it works down the line, we'll just wait and see."

Burgess, a forward in rugby league, left Sydney Rabbitohs last October after helping them beat Canterbury Bulldogs to win Australia's National Rugby League title in what was his final appearance for the club.

He made his Bath debut in a Premiership match against Harlequins in November, coming on as a replacement at centre, the position in which he would continue to feature for the Blue, Black and Whites, both domestically and in the European Champions Cup.

However, having played in the back row for Bath's A team, Burgess appeared at flanker in the Premiership for the first time in the 29-19 win over Newcastle on 10 April. 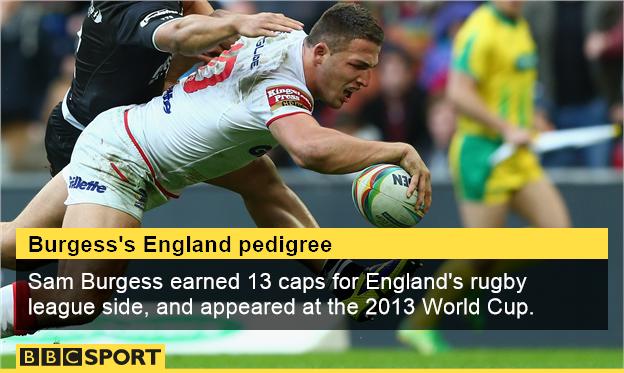 "I'm really enjoying the new role," he told BBC Points West. "It's not the first time I've done it because we did a bit of work in the flanks when I first came over, so it's not quite starting from scratch.

"It's been fine. I played a lot of Premiership games at 12 so I knew the standard. But I've played two or three games at flanker now and I'm starting to find my feet a bit."

Despite having spent time with the full England squad during the 2015 Six Nations, as well as making his Saxons debut against Ireland Wolfhounds in January, Burgess said he has had "very little" contact with head coach Stuart Lancaster.

Lancaster is due to name his 45-man training squad for this year's World Cup next week.

"I think everyone wants to be involved," said Burgess. "Anything to do with representing your country is the pinnacle in my eyes. I've always got a burning desire to represent my country.

"I think it's important for me to stay focused on my job at Bath and we'll wait and see how things go over the next week.

"At the forefront of my mind is just playing well with my team-mates at Bath and when the time comes round, if I'm in or not, I'll just enjoy it."