BBC Sport takes a look at who needs to do what in the final round of Pro12 fixtures in the race for the title and European Champions' Cup qualification.

The last six matches of the regular season all have something riding on them.

BBC Wales Sport online will be running a live text page on all the action as it unfolds from 14:30 BST on Saturday 16 May.

Here's our quick guide of what's at stake for each team. 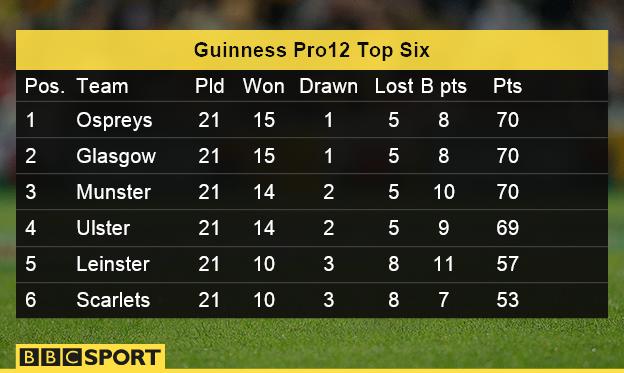 A win will probably be enough to earn leaders Ospreys a home draw in the Pro12 play-offs, but they need a bonus point to be absolutely sure. Connacht have an outside chance of sixth place if they win and Scarlets lose in Treviso, otherwise they are relying on Leinster beating Edinburgh and a place in the Champions Cup play-off against Gloucester.

Only a bonus-point win over Ulster will guarantee a home semi-final for the Warriors regardless of the Ospreys and Munster results. Ulster need a bonus point win to have a chance of a home draw. Glasgow have won all their home matches in the Pro12 so far this season.

Victory or a draw would be enough for the Scarlets to secure automatic qualification for the European Champions Cup. Even if they lose, it may still be enough depending on how Connacht and Edinburgh get on. A win for the home side would also seal their entry into Europe's premier club cup competition. 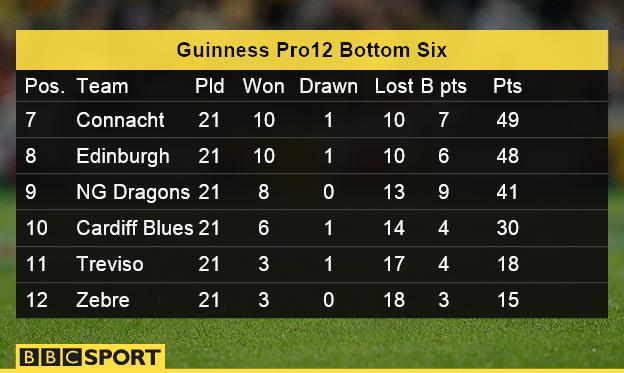 Victory of any kind for the Irish province will give them a chance of finishing in the top two, depending how Ospreys and Glasgow get on in their matches.

Cardiff will finish 10th in the table whatever the result against bottom side Zebre. But if the Italians repeat last season's victory at the Arms Park and Treviso lose, then Zebre will represent their country in next season's European Champions Cup.

Edinburgh need a bonus point win to stand any chance of breaking into the top six and qualify for the European Champions Cup automatically against 2014 champions Leinster who on paper have nothing to play for. Like Connacht, there is also the possibility of a European play-off against Gloucester for the Scottish team.