Leicester Tigers, Exeter Chiefs and Saracens head into the final day of the Premiership season on Saturday battling for two remaining play-off spots.

The three sides are separated by just one point in the league table.

"We have to win. There's no other way of us qualifying," Tigers boss Richard Cockerill told East Midlands Today.

"It is huge for us. Exeter were outstanding on Sunday against Saracens and that put the pressure on everybody. But we have to concentrate on what we can do.

"We seem to have found that little bit of energy and got our mojo back." 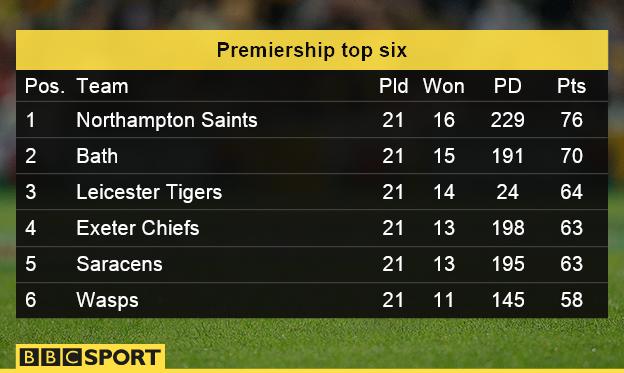 As things stand, the Tigers are third on 64 points, while fourth-placed Exeter and fifth-placed Sarries are tied on 63 points.

In the Premiership, the number of wins a team has accumulated takes precedence over points difference, meaning that regardless of bonus points on the final day, victory in the East Midlands derby will confirm Leicester's place in the play-offs.

However, with Exeter and Saracens both having achieved 13 wins this season and with only three points separating those two teams on points difference, the margin of victory for them on Saturday could be decisive.

"We'll be aware of the other scores, but I almost don't want to waste my energy on thinking about those things," Chiefs boss Rob Baxter told BBC Radio Devon.

"I want to make sure the players are aware that my energy is focusing on the one thing that makes everything else a possibility, and that's playing well against Sale.

"Making a decision on chasing points is absolutely irrelevant if we don't win the game. We have to be in the lead for those things to matter."

Exeter, only promoted to the top flight in 2010, have never been involved in the Premiership's end-of-season shootout, with a fifth-placed finish in 2012 their best to date.

Leicester, 10-times champions, have not finished outside the top four since 2004, while 2011 winners Saracens have competed in the play-offs in each of the last five seasons.

"We're probably a bit annoyed at ourselves that we've allowed it to come down to this last game," Sarries and England full-back Alex Goode told BBC London 94.9.

"But we've still got a good chance of going through. You have to look at it as though Leicester will win and Exeter will win, and win well, so all we can concentrate on is putting a big performance in."

Click here to read the various play-off permutations heading into the final day of the Premiership season.