Glasgow head coach Gregor Townsend knows Ulster will be a different prospect when the teams meet again next Friday in their Pro12 semi-final.

Warriors came from behind to rout a weakened Ulster 32-10 to finish the league standings in top spot.

"It will be a very tough game but we're just delighted to be playing at home," Townsend told BBC Scotland.

"They've got a few players coming back from injury and they had quality players on the bench today."

With a place in the last four already established, Ulster had little chance of reaching the top two and therefore elected to rest several big names for the trip to Scotstoun.

But the team selected by Neil Doak gave the Warriors a real fight, leading 10-6 until Stuart Hogg gathered his own chip on the run to score a wonderful try on 54 minutes.

"The catalyst was Stuart Hogg's try," explained Townsend. "You could see the whole place lifting.

"We hadn't fired a shot in the first 50 minutes but we managed to fire a few in the last 30.

"We knew it would be tough into the wind in that first half and we were disappointed to concede a try but we felt we'd get the wind advantage if we could just get our game going. 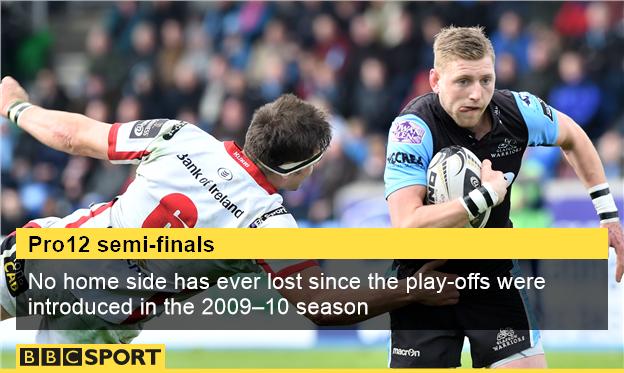 "Unfortunately, we didn't play that well in the first 10 minutes of the second half. But the last half-hour was very good."

Al Kellock, who will retire at the end of the season, captained Glasgow and the lock is pleased to have another game at Scotstoun to look forward to.

Having lost in the final last year, the 33-year-old is determined to go one better and end his career on a high.

"We knew the scores elsewhere," he told BBC Scotland of the matches involving top three rivals Munster and Ospreys. "We knew what we had to do.

"Ulster are a very good team and the conditions were such that we had to play two different halves.

"To keep them to a four-point lead at half-time was great and we came out and played some great rugby, especially in the last 20 minutes.

"They had a lot of big names on their bench but I thought our bench was absolutely superb.

"Now we need to improve on what we did last year and push as hard as we can to not only win this semi-final but to go on and take the title."