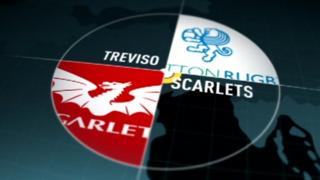 Scarlets claimed their place in the European Champions Cup with a gritty second half display against a highly-motivated Benetton Treviso side in Italy.

Tries by Liam Williams and Steffan Evans turned the tables in the Welsh region's favour.

Scarlets were given a huge let-off early in the second half when Henry Seniloli should have scored a third try for Treviso, but celebrated before reaching the line and was robbed of possession by Scott Williams.

Treviso also qualified for the Champions Cup as the highest-placed Italian team.