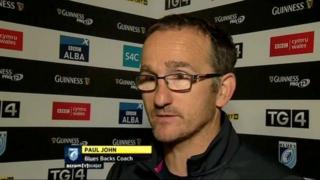 Cardiff Blues completed the season as the bottom-placed Welsh region in the Pro12, but were comfortable winners against Zebre.

A win for the Italians would have seen them qualify for the Champions' Cup, but they were never in it once Alex Cuthbert opened the scoring for the Welsh region.

The region will start interviewing for a new coach in the next few weeks, with caretaker Paul John saying he would like to stay.