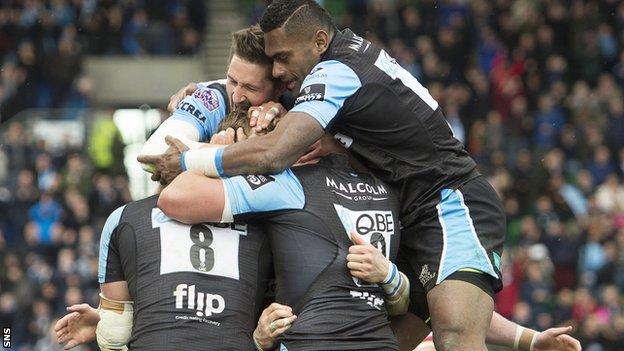 Glasgow Warriors have been warned against complacency in their Pro12 semi-final play-off against Ulster.

Former Scotland coach Jim Telfer said Warriors' victory when the sides met last weekend will not have a bearing on Friday's clash.

"Glasgow can't think that because they beat Ulster last time out they have the edge," Telfer told BBC Radio Scotland.

"They (Ulster) will be stronger. They rested a number of internationals but will be hungry this time around."

Warriors ran in four tries in their 32-10 win against Ulster last weekend but Telfer believes they can expect a sterner test.

He also praised the impact Warriors head coach Gregor Townsend, named Pro12 coach of the year, has had on Scottish rugby.

Townsend guided Warriors secured 16 Pro12 victories this season to set up their semi-final against Ulster.

"When I was coaching, Gregor was a fairly young player," Telfer said.

"Gregor is a very able person and a very articulate person; a very serious-minded chap. So, if he took the job on as coach, he would always do the best he could.

"A lot of his characteristics have come out in the team. I always think a team reflects how a man played the game or thought about the game.

"All these attributes he had: of ingenuity, of reacting to things in front of him during games, they all come out in his teams.

"But he has a pragmatic side to his coaching as well. He knows the simple principle that you don't win unless you have a good defence.

"But also you have to have flair and attack. These characteristics that he's brought to the team are very good for Scottish rugby."