Bath need to be "mad for it" when they host Leicester Tigers in Saturday's Premiership play-off semi-final, according to fly-half George Ford.

The Blue, Black and Whites will take on Richard Cockerill's side at The Rec for a place in the final at Twickenham.

"Being at home in the semi-final is great for our fans," England half-back Ford, 22, told BBC Radio Bristol.

"But we're under no illusions it's going to be a tough game. Anything can happen in play-off games."

He continued: "Leicester are going to come here mad for it - and we've just got to be mad for it ourselves."

Bath, who also reached the last eight of the European Champions Cup this season, are in the Premiership play-offs for the first time since 2010, when they were beaten in the semi-finals by eventual champions Leicester.

It is 19 years since they last lifted the top-flight trophy - during which time Tigers have won it eight times.

"These are the games you want to play in as a team and as individuals, and we're just looking forward to it," said Ford, who has been capped 11 times by his country and has been named in their preliminary World Cup squad. 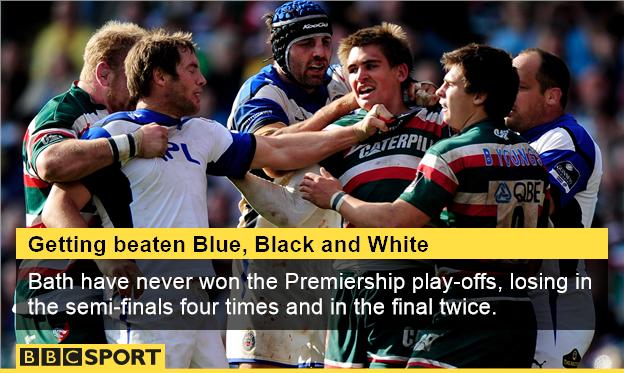 Bath's strong home form this season was key to them securing second spot in the Premiership table - their highest placing since 2004 - winning 10 of their 11 matches at The Rec.

Those victories include a 45-0 thrashing of Tigers early in the campaign, the heaviest top-flight defeat suffered by Leicester in their history.

"I think that one's pretty irrelevant, to be honest," said 33-year-old captain Stuart Hooper. "It was a very different time of year, with two pretty different teams playing against each other.

"We're pleased we won the game, of course we are. But it's gone - and we played 21 other games that got us to where we are now too.