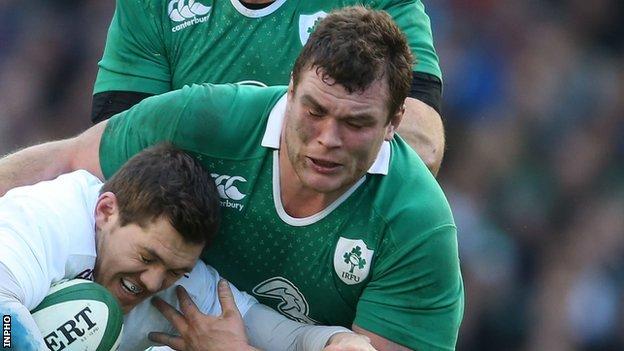 Ireland duo Jack McGrath and Ian Madigan have not been cited following their respective incidents in the 22-21 defeat by the Barbarians in Limerick.

Prop McGrath was sin-binned for kneeing Konstantin Mikautadze in the back, while fly-half Madigan avoided censure for a potential stamping offence.

Neither player was cited in the two-hour window after an exhibition match during which incidents must be lodged.

The pair will be clear to take part in Ireland's World Cup warm-up games.

Given that France's Pascal Pape was given a 10-week ban for a similar kneeing incident on Jamie Heaslip during this year's Six Nations, Leinster loosehead McGrath, 25, will perhaps consider himself fortunate to escape a disciplinary hearing.

An IRFU spokesperson confirmed to the BBC that opposition teams were allowed only an hour after the final whistle to refer any potential incidences of foul play to the citing commissioner, the IRFU's Eddie Walsh.

Barbarians Head Coach Robbie Deans did not do so and Walsh did not deem McGrath's offence worthy of any more than the yellow card handed out by referee Greg Garner.

Walsh also felt that Madigan's use of the boot in the same passage of the game at Thomond Park was not dangerous play.

Ireland Head Coach Joe Schmidt had expressed concern about the possible fallout from the incidents after the game but will be relieved that no action has been taken.

Schmidt confirmed that McGrath's actions contributed to his refusal to send the front-rower back into the fray at the end of his sin-bin period.

"It was partially that, and partially because we wanted to give Michael Bent a decent run," he said.

"We don't probably need to know too much more about Jack.

"You don't get too many free throws of the dice at Test match rugby, so this was a chance to get a look at some players, and that's the reason why we left some guys out altogether."

Ulster flanker Chris Henry made an impressive return on his first Ireland outing since a mini-stroke in November, scoring one of his side's three tries.

The 30-year-old proved his heart procedure in recovering from his autumn illness has had no effect on his World Cup chances.

"I think he's really good in the group. He has an infectious positivity about him.

"He's worked very hard and showed a lot of character to get back into the frame. He's certainly still in our thinking."

"I thought it was great for him to finish that try. He's still working his way back to the top of his game, and this was another step forward.