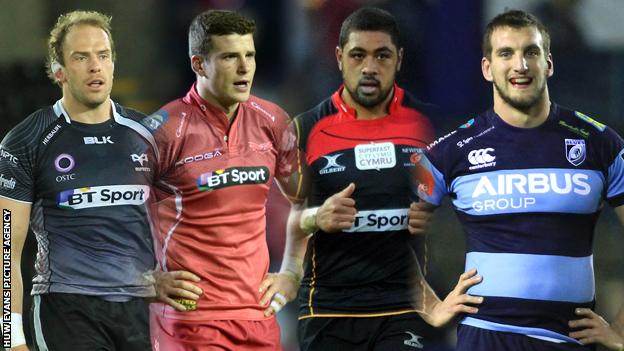 Ospreys have been drawn alongside last season's runners-up Clermont Auvergne, Exeter and Bordeaux in Pool 2 of the European Champions Cup.

Scarlets will face Glasgow, Northampton and Racing 92 in Pool 3 of the same competition.

In the Challenge Cup, Cardiff Blues have been drawn with Montpellier, Harlequins and Calvisano in Pool 3.

Former Scarlets wing George North is set to return to Parc y Scarlets with current side Northampton in Pool 3.

There will also be a reunion for Blues in the Challenge Cup, as they face former players Jamie Roberts and Adam Jones, the Wales internationals who have joined Harlequins.

Lyon will host the Champions Cup final on Saturday, 14 May, 2016, while its new 59,000-capacity Grand Stade de Lyon will stage the Challenge Cup a day earlier.