The BBC and ITV have won the rights to broadcast rugby's Six Nations competition for the next six years.

Taylor, who has been ITV's Rugby World Cup commentator, thinks it is important the sport remains on terrestrial television.

"In terms of the importance to the game, it's brilliant," said Taylor.

"I think it's often underestimated how important it is to be free-to-air as it were, so the whole nation can see it.

"In somewhere like Wales, where we need that stimulus, it really counts, because there is no question audiences suffer when you go over to Sky or BT." 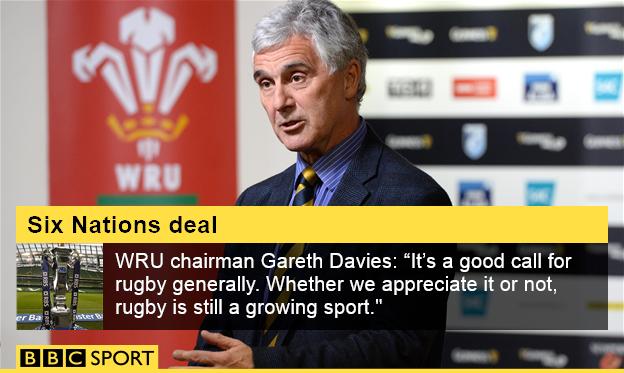 Almost 10 million people watched the finale of the 2015 Six Nations on the BBC.

The new joint broadcasting deal runs from the 2016.

All of Wales' home matches will be shown live on the BBC, along with France and Scotland home matches.

A statement on the website of Welsh language channel S4C also stated: "Championship games which are broadcast by the BBC will also be broadcast in Welsh on S4C.

"Any further rights will be a matter for negotiations."

Taylor, who commentated on the 2003 Rugby World Cup final for ITV, is amazed that the two rival broadcasters are now working together.

"In my day, not as a player but as a broadcaster, it was 'never the Twain shall meet' and we were head-to-head for everything.

"The idea of cooperation was something that never came into it.

"In the last year you've already seen the precursor to it with a few of the presenters crossing over, working on both ITV and for the BBC and it seems a complete change of culture now."