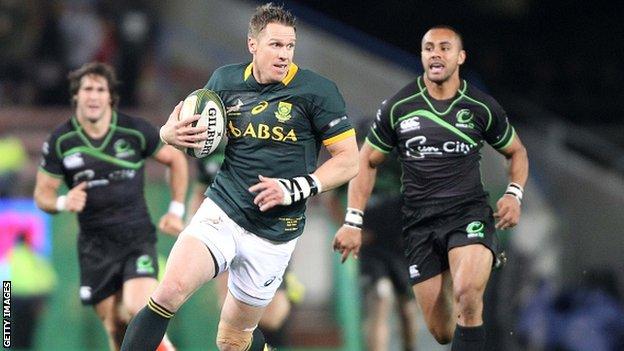 South Africa captain Jean de Villiers made his first appearance for eight months in an exhibition game ahead of this autumn's World Cup in England.

De Villiers, 34, twisted his knee, dislocated his knee cap and damaged ligaments against Wales in November.

But the former Munster inside centre played the final 20 minutes as South Africa overcame a World XV 46-10 on Saturday at Newlands in Cape Town.

The World Cup begins on 18 September when England host Fiji at Twickenham.

South Africa are in the same group as Samoa, Scotland, Japan and United States.

Their opening game is against Japan in Brighton on 19 September.