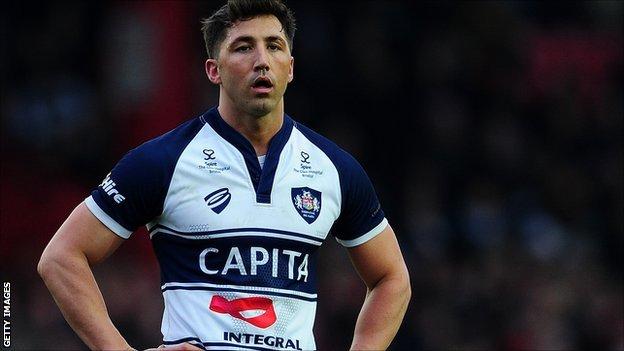 Bristol's director of rugby Andy Robinson says he is encouraged by the progress of centre Gavin Henson.

Henson broke his shin in the first leg of last season's play-off final and the club are hopeful he will return some time in the middle of October.

"He is very professional with how he approaches his work and is moving forward quickly," Robinson told BBC Radio Bristol.

"There is a lot of recovery and rehab for them to do but they are on track."

Speaking to the club's website, head of medical services Rory Murray added: "Gavin has been great really. That really was quite a serious injury, and something that wasn't stated or emphasised at the time.

"When we went in under surgery there was quite a lot that needed doing, but Gavin's been great and we're very pleased on how he has come on.

"Out of the three that have had surgery in the past few months, Gavin is progressing the quickest. We expect to see him in mid-October."

The club also have high-profile injuries to fellow Wales internationals Ian Evans and Ryan Jones and Murray added: "Ryan Jones is in a sling following a quite successful, but a quite serious surgery.

"He's in the early stages of his development but we feel pretty good about how that surgery went and we're positive about his chances of returning, imminently."

"Ian is making good progress and it's so healthy to see him walk about now without a brace. He's started the early part of his rehab and we expect to see him around mid January."

After last season's play-off final heartbreak, Robinson says they have spent the summer getting over the disappointment and are ready to attack the new season.

"We won't forget what happened, it is pretty disappointing to still be in the Championship," he said.

"That is the qualification process and you need to be able to deal with that.

"The boys have come back and there is a renewed vigour about the way they are training and there is a very good focus about what we have to achieve."