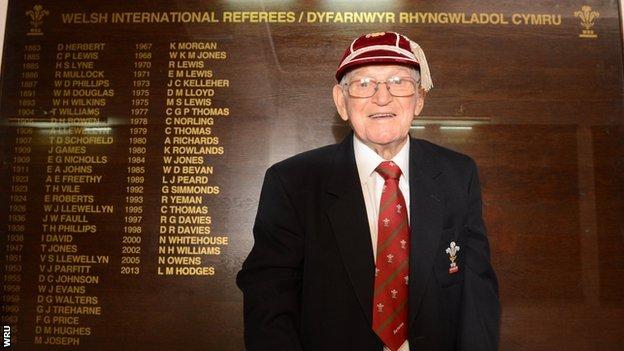 Ernie Lewis, who was Wales' oldest surviving international rugby union referee, has died at the age of 91.

A former teacher, Lewis started refereeing in 1956 and took charge of the France v Australia international in Toulouse in December 1971.

He refereed many Barbarians games and was a regular touch judge in international matches.

He was running the line when Gareth Edwards scored "that try" for the Barbarians against New Zealand in 1973.

Recalling his international debut as a referee, Lewis said he "needed a police escort to get to the dressing room" after a controversial penalty helped Australia to a 13-11 win over France.

Before turning to refereeing, Lewis enjoyed a successful playing career with Ebbw Vale, Abertillery and Newport. He also played against Australia (1974) and New Zealand (1975) for a combined Abertillery and Cross Keys side, both at Abertillery Park.

After retiring as a referee, he went on to become a WRU referee assessor and president of the Welsh Society of Rugby Referees. His son is former WRU chief executive Steve Lewis.

His funeral will take place on Tuesday, 4 August at 1400 BST at the Gwent Crematorium in Cwmbran.