Wales coach Warren Gatland says his team are all playing for World Cup places against Ireland on Saturday.

Gatland has selected four uncapped players in the team to face Ireland in the first of three warm-up matches.

The New Zealander will reduce his squad from 46 to "36 or 38" before the second game against Ireland on 29 August.

"There's a chance for some of the fringe players and even the more experienced players to go out there and perform," said Gatland.

''The other thing, too, is that if you want to impress, in front of 75,000 people with the roof closed at home, then there's no better opportunity.

''I'm trying to give these players the best possible chance to go out there and perform.'' 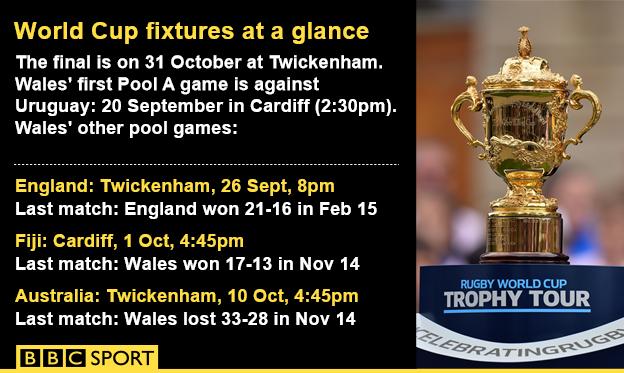 Ross Moriarty, Tyler Morgan, Eli Walker and Dominic Day will make their Wales debuts at the Millennium Stadium on Saturday.

The side will be captained by Scott Williams, with usual skipper Sam Warburton omitted along with a number of senior players including Alun Wyn Jones and Leigh Halfpenny.

Gatland revealed that Gareth Anscombe would have made it five new caps but a thigh strain means the New Zealand-born fly-half will be on the bench.

James Hook comes in at 10 and will form a half-back partnership with Mike Phillips for the first time since Wales lost the third-place play-off against Australia at the 2011 World Cup.

Gatland was in charge of that Wales team and says the current squad is better prepared than fours years ago.

And he admitted that was going to make reducing the squad a difficult task for the selectors.

''Compared with preparation for 2011, this has definitely been a step up,'' he added.

''The guys have responded incredibly well and for everyone it just shows how much they want to make the World Cup squad and be a part of it.

''It's going to be tough on us as coaches and selectors to let some players down when we make that final cut.

"But it's a big game on Saturday and hopefully they can get us off on the right foot."

Gatland will name his final 31-man World Cup squad on August 31. Wales open their World Cup campaign against Uruguay at the Millennium Stadium on 20 September.