Wales coach Warren Gatland has picked a starting XV containing four debutants - Ross Moriarty, Tyler Morgan, Eli Walker and Dominic Day - but with plenty of experience elsewhere in the side. The squad will be reduced after the game and a final 31 for the World Cup will be selected on 31 August.

You've got a combination of young and old in the side to face Ireland on Saturday and it does tally up to a fair amount of caps when you see who's in the side.

There are a couple of new caps but the main thing that's drawing everybody's attention is people have wanted to see flanker Justin Tipuric and fly-half James Hook play and start.

For two guys that are more than likely going to be in the final squad for the World Cup, it's a really good opportunity to lay down a marker.

Look who they're going against: You've got Dan Biggar and he's been playing outstandingly well at 10 during the Six Nations; and the captain Sam Warburton at seven who's second to none at the moment.

If you look at combinations, Hook and scrum-half Mike Phillips played at the Ospreys together a fair few years ago and have played many a time for Wales together - just like Rhys Webb and Dan are playing for the Ospreys and Wales now.

Whether you want to call it 'old guard, young guard', it's a good, exciting shoot-out to give those two the chance to show what they can do.

It's a combination we haven't seen for a while, but remember Hook and Phillips played together when we beat France to win the Grand Slam in 2008. 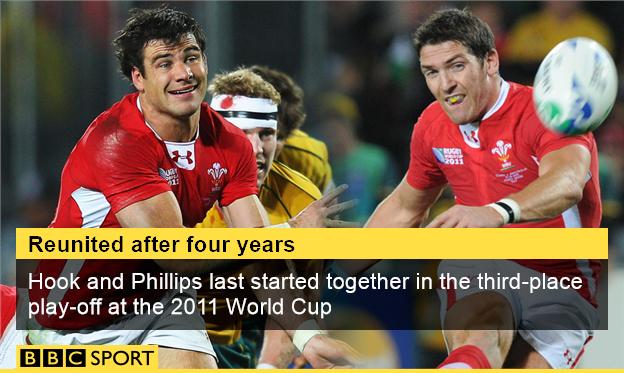 Now Hooky has put a lot of effort into getting a starting chance and he's just got to make the most of it... he'll be looking to make a marker and say: "Warren, I believe I'm the best number 10 in Wales".

Tipuric has two guys alongside him - Dan Baker and Ross Moriarty - who aren't very experienced, so he has to have a real stand-out match.

He has to show a lot of mobility and really provide a great link and continuity from that breakdown area.

If you look at Sam Warburton and across the back-row at Taulupe Faletau and Dan Lydiate, they are very big, physical guys.

Tipuric has got the mobility, speed and skills that we'll never question, he's just got to punch above his weight and show some muscle about the park - he's got the brain and rugby knowledge to play at six or seven so we've just got to wait and see what he delivers on Saturday.

Moriarty, winning his first cap, comes from pedigree doesn't he? It's like the Quinnells all over again!

He's had a very strong season at Gloucester, he's a very physical guy and his father Paul's influence from rugby league comes in a bit there.

Baker has had a really good season with the Ospreys and he kept some very good players out of that back-row.

Both of them are looking for experience, they've still got a long way to step up from the rugby they've been playing... but both have got an opportunity more than anything to get their first caps under their belts, get out there and stake a claim to be in the squad.

Faletau, who is on the bench on Saturday, has been in the news about a possible move to England to join Bath. He probably knows what he wants to do and has a good idea of what his agent and clubs are talking about.

We know he's a very strong home-bird, he loves being around his friends here in Wales. 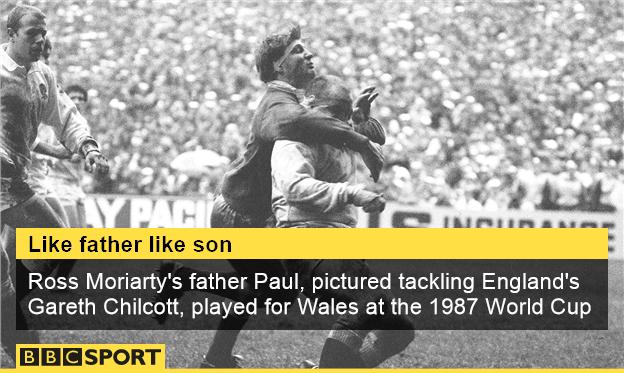 But if we're brutally honest the level of rugby that he's been playing at the Dragons week in week out isn't the standard that we need him to be playing.

So if the option for him to play at a higher level happens to be in England then he's got to go for it, he needs to be playing at the highest level he can possibly play.

If he wants to go to Bath, if he wants to stay at the Dragons the decision is his completely, but at the moment he's probably switched from any kind of focus on club rugby to the upcoming World Cup.

Warren Gatland and probably the coaches of the clubs are looking for some longevity, security and stability more than anything.

This is the eternal debate: as a player do you secure your future through earnings or play at the highest level possible, or do you stick at home, stay true to your region and hopefully make Warren's life a lot easier?

But I can remember in 2003 I went to the World Cup and I didn't have a club, let alone two arguing over me.

It doesn't affect your preparation, you're still completely focused on playing for Wales and that's your prime directive.

Whether your domestic rugby is regional, England, France it doesn't really matter now, they've been in camp for a few weeks and... now you're just 'Club Wales'.

Faletau has played for the British and Irish Lions but it's his first opportunity to play for Wales in a World Cup and it's come at a very good time for him.

He's been an international now for a few years and he's one of the guys that it's just the right time to put in some stand-out performances.

Along with Moriarty, Dominic Day, Tyler Morgan and Eli Walker are the other players about to make their debuts for Wales.

Those names have been bandied about for quite a while, but they haven't been blooded just yet because there hasn't really been an opportunity for them Six Nations-wise and really this is the only opportunity that they'll get.

If you can perform against Ireland and come out with some plaudits, there's every opportunity to make that final squad.

It would be naive to think they're there to make up the numbers. Warren doesn't just hand out caps willy-nilly, we all know that.

You have to acknowledge that there's pressure in a Test match environment and... the guys that really thrive are the guys that enjoy that. Cometh the hour, cometh the man - Scott Gibbs always used that verse.

If these guys want to thrive on the international scene they've got to absorb pressure and grow with it. Let's just hope they can do that on Saturday afternoon at the Millennium Stadium.