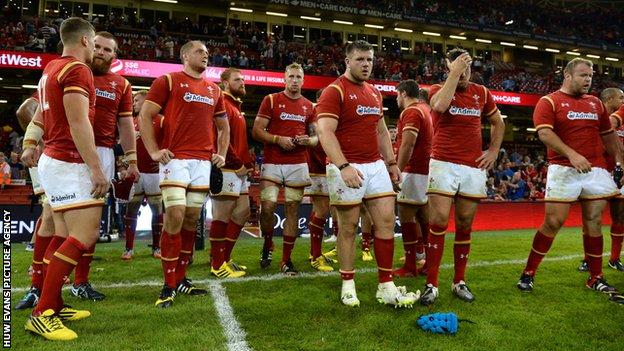 Warren Gatland has a lot to ponder following Wales' 35-21 defeat by Ireland in their first World Cup warm-up match in Cardiff.

He takes his 46-man squad for a camp in north Wales on Monday and will announce a smaller party between 36 to 38 at the end of the week.

So with the players trying to impress against a dominant Irish squad, who is likely to be in, who will be left out and which ones still have the jury out?

Former Wales captain Rob Jones watched the game for BBC Radio Wales, and gives us his verdict on the team.

"This was a hugely, hugely disappointing in terms of the gulf between the two sides.

"I don't think too many players have put their hands up and are pushing Warren Gatland to put their name on the squad list.

"The only thing I'd say, particularly on behalf of the backs and the back row, Wales were always on the back foot and it's always hard to impress under those circumstances.

15 Hallam Amos: I thought he was okay especially as Wales were on the back foot. He is one who can develop for the future. Whether he's right for this World Cup I'm not quite sure at the moment. But bearing in mind he can play at full-back and the wing that gives him a chance.

14 Alex Cuthbert: He is a player who is under pressure. He might keep his place because of the lack of depth but he's not anywhere near the form that he showed a couple of seasons ago.

13 Tyler Morgan: He was in and out of the game, made mistakes as everyone did. I think the management believe he is one for the future. Not the greatest game, but I think he'll make the squad.

12 Scott Williams: He is obviously going to go to the World Cup and hopefully his leg injury won't be too bad.

11 Eli Walker: I thought Eli Walker was good. I thought he looked sharp, he did a lot of good things and he's an exciting player and we don't have too many of them. He did put his hand up.

10 James Hook: I think he's given James Hook an opportunity because the whole of the Welsh public want him there. On this performance has he done enough when you consider they've got Biggar, Priestland and Anscombe who did well when he came on? He probably hasn't, in my eye. At this stage, he may not make it.

1 Nicky Smith: The pack were disappointing at the set-piece and the front row have to take a lot of the responsibility.

2 Richard Hibbard: He will be one of three hookers in the squad. I don't know what order they will be, but he will definitely be one of them.

3 Aaron Jarvis: We have tight-head concerns and I don't think Aaron Jarvis or Scott Andrews are quite up to the level we want them to be at.

4 Jake Ball: Again I think he is a certainty to make the World Cup squad. But he was playing in a badly beaten pack.

5 Dominic Day: He didn't have a great international debut. He may have played himself out because we have enough strength in the second row.

6 Ross Moriarty: Like Dan Baker he had a tough time. It's difficult to judge because Wales had no forward momentum.

7 Justin Tipuric: Was good and creative as always, but he was always going to be in the World Cup squad.

8 Dan Baker: Again he was under pressure at the back of a scrum that was struggling and a lineout that couldn't get any forward momentum.

Lloyd Williams: When he came on when the game was different looked a bit sharper and got the backline moving a little bit quicker.

Gareth Anscombe: He was quite impressive off the bench.

Scott Andrews: We might need three or four tight-heads because of the injury to Samson Lee, but I think it's significant Tom Francis wasn't playing today - perhaps they have decided he's one they will look at further down the line.

Kristian Dacey: Not sure he made enough impact because of the tough competition at hooker.

Taulupe Faletau: He gave them a bit of go forward when he came on but we know what he brings and he will go to the World Cup.

Matthew Morgan: He's an exciting player and he can play anywhere. He probably tried a little bit too hard and made errors. I don't think he will figure in Warren Gatland's philosophy.