In his 2015 Rugby World Cup column for the BBC Scrum V website, former Wales captain and back-row Colin Charvis considers the futures of Richard Hibbard, James Hook and Mike Phillips after they are cut from the World Cup training squad.

I did not see that coming. The axe has cut deep in Wales' World Cup squad.

I've always thought Wales head coach Warren Gatland has been loyal to players who have performed well in the past.

His decision to drop Richard Hibbard, James Hook and Mike Phillips from his World Cup squad was a brave one.

And although I don't think this was a knee-jerk reaction to the defeat by Ireland, I'm sure there would have been some frank discussions afterwards.

Where Phillips is concerned, Wales need to take three world-class scrum-halves to the World Cup and he's been deemed surplus to requirements.

As for Hibbard, he's been the first-choice hooker for a long time so that's surprising.

And with Hook, I thought the fact he'd been given a start against Ireland was a chance for him to lay down a marker for a first-team place. It seemed he was on his way back into Gatland's thoughts, either as a utility back or a fly-half.

So to see them all miss out was a surprise.

Hook may be confused and frustrated

One thing about rugby players is that they don't like to be retired - they like to make the decision themselves.

Hibbard, 31, is going to want to force his way back into that Wales team. He won't look at this as a door closed. He'll go back to his club, Gloucester, and I'm sure he'll put a lot of effort in.

Phillips might be a little bit more realistic. At 32, can he play another four years and play the next World Cup?

Coaches work in cycles and, as soon as this World Cup is over, they'll start building for the next one. 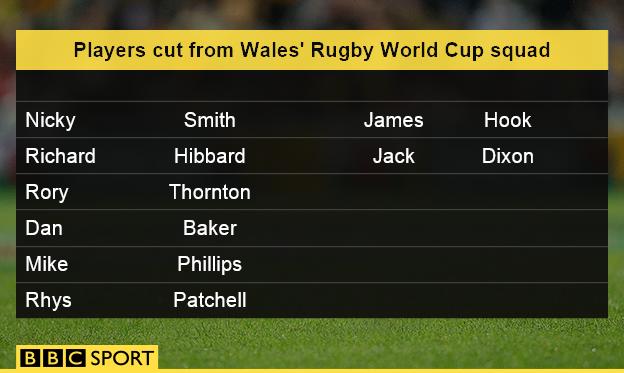 With Hook, 30, I think it might be a case of simply not knowing what happened. He's never moaned and always bided his time.

He's probably feeling confused and frustrated, rather than being ready to hang up his boots for Wales.

It's a shame to see it happen to guys who've served Wales for so long, but we can't get sentimental.

We've got to get behind the other, younger players and see if they can become a strong World Cup squad.

Flanker Justin Tipuric and wing Eli Walker had good games against Ireland. It's just a shame those two play in positions where Wales are so strong.

And there lies the problem facing the younger guys - most of our players are so well-established in the first team, it's going to take a massive effort to break into that team.

Apart from Hibbard, those three most notable players of the eight cut from the squad didn't really feature in the starting line-up recently.

I expect Wales will be as close to full strength as possible against Ireland on 29 August, so I don't think there will be many more high-profile casualties.

World Cup warm-up matches are not a comfortable situation, going into a game knowing it's a trial for your Wales career.

It distracts you. It becomes a case of thinking about yourself and your own performance, not how you can slot into the team's performance.

In 1999 and 2003, I'd been pretty much ever-present in the team for 18 months leading up to the tournaments, so that makes you confident.

But I remember playing in a World Cup warm-up match against England in 2007 and I'd been in and out of the team.

It brought an extra level of anxiety to the game, but that's the pressure we like to put on ourselves.

It was great to see Cardiff awash with red when Ireland were in town last Saturday. It was a great occasion but just a shame about the result and performance.

I don't think there was anyone in that Wales team there just to make up the numbers - they all had a chance to force their way into the World Cup squad. 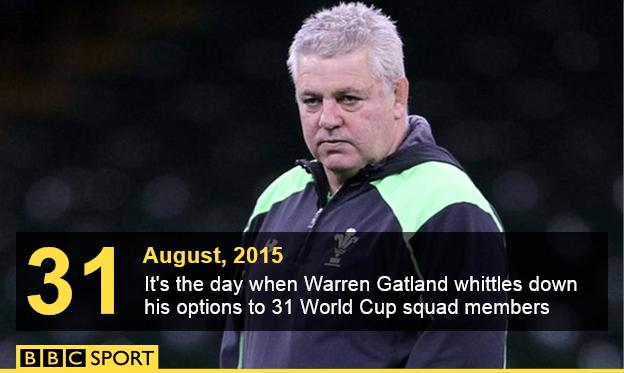 I think the players will be disappointed in themselves, frustrated that they couldn't take advantage of their opportunities to impress.

The return fixture against Ireland and the following match against Italy are now must-win games in many ways.

Wales are running out of chances to test their younger and fringe players, so they will be fully-loaded for the game in Dublin on 29 August.

If we class these games as trial matches, the coaches are going to be looking at the Wales players to show their mettle.