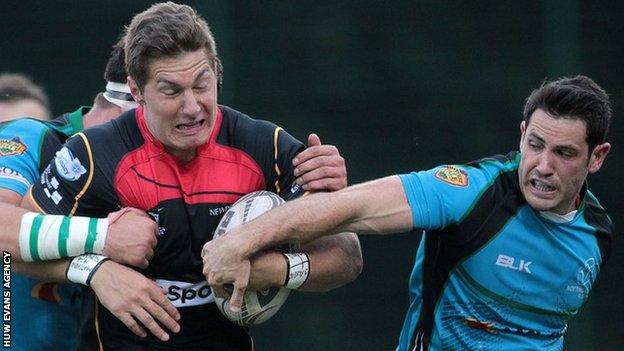 Newport Gwent Dragons kicked off their pre-season campaign with a 48-12 win against English championship side Nottingham.

Dragons trailed 12-10 at the interval at their Ystrad Mynach training base.

Nottingham's Billy Robinson and skipper Paul Grant's tries came either side of one by Hugh Gustafson.

Nic Cudd, Phil Price and Nick Crosswell were followed to the line by Keagan Bale and Carl Meyer as Dragons ensured victory after the break.

The Dragons used more than 30 players including five newcomers in the training run-out.

Wales wing Aled Brew played the second half after being out since last November with back trouble.

Number eight Taulupe Faletau, the subject of transfer speculation after interest from Bath, was a spectator in the 1,330 crowd as he took time out from Wales World Cup training.

The Dragons have further friendlies against the Scarlets at Rodney Parade and at Cardiff Blues, before they kick off their Pro12 campaign at Connacht on 4 September.