Wales' 2015 World Cup adventure starts on 20 September when they play Uruguay at the Millennium Stadium.

In addition to the South Americans, Wales face previous winners England and Australia, as well as Fiji who who ended Welsh involvement in the 2007 tournament.

It is the pool everyone else is glad they avoided, with three of the top six teams in World Rugby's rankings plus the Pacific Cup champions vying for two places in the quarter-finals.

So who will survive and who will fall at the first hurdle? We take a look at the teams with a month to go before the big kick-off. 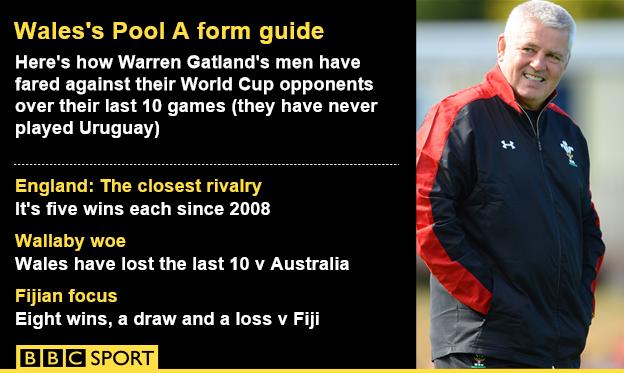 Even this close to the event, there remains something of the enigma about Warren Gatland's team.

While most of the home nations have launched into their warm-up programmes, with games scheduled on consecutive weekends, Wales have dipped their toes, been scalded, and retreated to their Vale of Glamorgan HQ.

It's difficult to gauge exactly where they are.

The defeat to Ireland was disheartening, but it was suffered by a patched-together side comprised of players who'd barely touched a ball in play during their intensive conditioning regime.

After their north Wales sojourn, the squad travelled the 200 miles back, with each wondering whether the final stop at Cardiff Central station would signal the end of their World Cup journey.

For eight of them it did, and British and Irish Lions Mike Phillips, James Hook and Richard Hibbard were among their number.

All those lung-busting sessions in the debilitating Doha heat, all those vertiginous slogs up the slopes of the Swiss Alps. All for nothing. It's the brutal reality of professional sport.

By the end of the month, another seven will be jettisoned. As of last Sunday, they've been in lockdown.

They may have cancelled their trip to Poland, but they're applying Polish principles to their week in the Vale. No media, no wives and girlfriends, no distractions. The side that pitches up in Dublin on 29 August will be more reflective of Wales' first-choice team.

England: Brains as well as brawn?

Nothing Wales does in the build-up to the World Cup can be viewed in isolation.

Their progress will inevitably be charted against their Pool A opponents. England have plenty to work on, but have the consolation of a victory under their belt.

They fielded an experimental line-up for the 19-14 win against France on Saturday, and produced a very un-English performance.

They were bullied up front for long periods, but displayed a degree of fizz and sparkle out wide that will have put Wales on alert.

Shaun Edwards will have taken note of Antony Watson's sublime finishing skills, and of the way Henry Slade unpicked the French defence with wit and guile.

Like Wales, we have yet to see their full-strength team, but Stuart Lancaster appears to have a luxury of riches at his disposal behind the scrum.

The return of stalwarts such as Dan Cole, Tom Youngs and Courtney Lawes for the return fixture in Paris will add the ballast that was missing at Twickenham.

Australia, meanwhile, have undergone a renaissance under coach Michael Cheika. Before he took the reins, they were on the verge of careering spectacularly off course.

The series defeat by the Lions in 2013 triggered a meltdown, with off-field indiscretions more worthy of headlines than on-field performances.

But Cheika has brought a steely edge, and delivered a first Rugby Championship for four years.

The victory over New Zealand in Sydney addressed the erroneous assumption that they're a soft touch up front.

Their scrum - beefed up by the likes of Scott Sio and Sekope Kepu - had the All Blacks sliding backwards on a number of occasions.

And the strut and swagger of the David Pocock-Michael Hooper axis meant they ruled the roost at the breakdown. Australia's gifted backs have turned winning while on the back foot into an art form.

Imagining what the likes of Matt Giteau and Israel Folau are capable of with a solid set-piece is the stuff of nightmares for their pool opponents.

New Zealand's emphatic victory in Auckland a week later has inevitably taken the shine off the Sydney win.

But it should be remembered, that Cheika made six changes for that match, which was contested in the bear-pit of Eden Park - a ground where New Zealand haven't lost for 20 years.

Wallabies fans may have been crestfallen by events at Eden Park, but like Wales' warm-up against Ireland, it may have little relevance come the World Cup.

During the build-up to last autumn's game against Fiji, Warren Gatland was subjected to a barrage of questions about Wales ignominious World Cup defeat to the Pacific Islanders in 2007.

He pointed out that a more suitable reference would have been Wales' 66-0 trouncing of the same opponents four years later.

This year's most useful point of reference might be Fiji's recent victory over Samoa in the final of the Pacific Nations Cup.

The side of 2011, whose campaign was derailed by in-fighting before they even took to the pitch against Wales, are a far cry from this current vintage.

The likes of Nikola Matawalu and Leone Nakawara are Pro12 champions, and no less an authority than Bob Dwyer has predicted that either Wales or England will fall to them in the group of death.

And former Fiji coach Wayne Pivac - now in charge at the Scarlets - believes they will target Wales for a shock result.

Fiji could yet prove the kingmakers in this most dastardly of pools.

The tiny South American nation may be more synonymous with the round ball, having won the football World Cup twice, but they're determined to be more than just Pool A whipping boys.

That is likely to be their destiny though, given that their only full-time professional - Castres second row Rodrigo Ortega Capo - mysteriously retired from international rugby in June.

They shipped 100 points last time they faced England in a World Cup, back in 2003.

The Uruguayans are Wales' first opponents on 20 August at the Millennium Stadium, and Gatland's men will want to rack up the points.

In a pool that could well be decided on points difference, the Uruguay game could prove as significant in its way as all the rest.