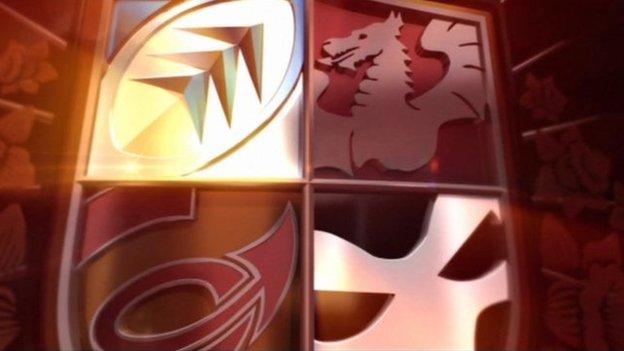 World Cup fever may be spreading, but before the game's global showpiece kicks off on September 18, the Pro12 returns to our screens on Friday, 4 September.

The first seven rounds will tell us who has the wiliest coaches, and the strongest squads, as all 12 teams try to cope with absentees and international call-ups.

Who will cope best without their star men? And can anyone dethrone Ospreys as the leading Welsh region?

Having finished at an all-time low of 10th last season, you'd think the only way for the Blues is up. The patience of the Arms Park faithful is wearing thin, as the region limps from season to season, discarding head coaches like used sweet wrappers.

The watchwords from the new man at the helm, Danny Wilson, will be patience and pragmatism. He's spoken of building a game that "suits the Cardiff Blues", but this is a project that will benefit from a delicate touch. Evolution not revolution.

During a period when they'll be without Sam Warburton, Gethin Jenkins and Lloyd Williams, the likelihood is we'll see a team that defends well, and kicks a lot. The hoary old cliche about putting the foundations in first is particularly apposite here.

Wilson has inherited a squad that looks weaker on paper than last season. They've lost ballast in the form of Filo Paulo, and firepower in departing Pumas Lucas Amorosino and Joaquin Tuculet.

But in Wilson they've recruited a wily operator who has a track record in turning teams around. He transformed the Scarlets' scrum into a powerful weapon, and will be looking to do the same at the Arms Park.

Behind the pack, an interesting duel will continue to develop between Gareth Anscombe and Rhys Patchell for the fly-half jersey. Both have recently benefited from an extended period in the national squad. Both will have big points to prove.

The Dragons want to be taken seriously. For too long they've been seen as Welsh rugby's poor relations, and they're no longer willing to take it.

They enter this campaign with a decent pre-season record, including a victory over the Blues, and they've recently been crowned Singha Sevens champions. That should make people stand up and take notice.

Captain Rhys Thomas told me at the Pro12 launch that he had to go through a three-stage interview for the job, and is behind the region's desire to "act more positively". The days of going into games as underdogs, and preying on opposition mistakes are over.

The Dragons are - along with Connacht - the least affected by World Cup call-ups. Just Taulupe Faletau and Hallam Amos will be missing from start of their campaign.

The fact we're still talking about Faletau as a Dragons player is a huge positive for the region. Speculation over a big-money move to Bath struck at the heart of the Dragons' identity crisis. Selling Faletau for a transfer fee may have made sense as a cold business decision, but it would have fatally undermined their ambition, and the image they're trying to sell to their fans.

They won four of their last six last season, but will need to bring a five-match losing streak against Connacht to an end if they're to open this year's account with a victory.

Having survived the desperate dogfight for European qualification last season, the Scarlets are setting their sights higher. The ambition "has to be" to reach the top four this year, according to head coach Wayne Pivac.

They'll have to negotiate the opening rounds without the likes of Samson Lee, Ken Owens, Scott Williams, Gareth Davies and Liam Williams, but this will be offset by the return of Stephen Jones to the coaching staff. Pivac was effusive in his praise of Jones at the tournament launch, speaking of his knowledge, enthusiasm, and ability to read the game.

His arrival has coincided with the departure of his successor in the Scarlets fly-half shirt, Rhys Priestland. The west Wales region have decided against buying a like-for-like replacement, leading many to think Steve Shingler will get a run in the jersey. But with Aled Thomas returning, and Dan Jones impressing in pre-season, it could be up for grabs.

DTH van de Merwe will add considerable firepower to the backline, but Pivac will have to wait until Canada's World Cup campaign comes to an end to get his hands on the flyer. Elsewhere, John Barclay's omission from the Scotland squad will boost the Scarlets' back-row options.

There'll be no better test of their mettle than an opening fixture against the defending champions.

Ospreys came within a disallowed try of reaching the final last year, and were once again Wales's highest achievers. Their ability to churn out talent over the years has proved both a blessing and a curse.

They're the joint most successful side in the tournament's history (along with Leinster), but they're hit harder than most during international periods. Nine of their players are in the Wales squad, another two are away with Canada and one with Fiji.

But history suggests they can absorb these losses and flourish. Four years ago, they also supplied more Welshmen to the World Cup than any other side, and began the season with a heavily depleted squad. Their record during the World Cup? Played six, won six. Their finishing position? Champions.

The returning Eli Walker and Dan Baker will undoubtedly bolster their ranks, and once again they've recruited shrewdly with former All Black Brendan Leonard and Wales international Gareth Delve.