Eight years on, I am still puzzled by my first World Cup experience.

There was me, a raw 22-year-old, absolutely thrilled to be heading into the 2007 tournament only for my excitement to turn to disillusionment as I didn't get the chance to play at any stage despite the team having a nightmare.

It wasn't just me though, because Alan Quinlan, Bryan Young and Brian Carney also found themselves surplus to requirements.

Quinny and I still have banter about those less-than-glorious days in the 'Bordeaux Four'.

For a young fellow at his first World Cup, the divide between the guys coach Eddie O'Sullivan was sticking with through thin and thinner, and those of us who weren't getting a look in, felt absolutely massive.

Eddie is a bright guy but has admitted himself he got the planning all wrong in 2007 as he soldiered on with basically the same team for the entire tournament.

Four years ago under Declan Kidney, it was much better as everybody felt part of it - even though ultimately we were to suffer bitter disappointment as the high of beating Australia in the pool game was followed by a real let-down in the quarter-final against Wales.

How will Joe Schmidt play it at this World Cup?

I am certain there will be no frustrated tourists in the Ireland squad this year.

Joe will ensure everybody gets some game time, which will have the twin effect of maintaining sharpness throughout the squad and also keeping the apparent front-liners on their toes.

But first things first, I think he should pick the same team he intends to go with against France on 11 October for Saturday's opener against Canada.

There's no getting away from the fact there must have been concern in the Ireland squad with recent performances - and in particular the awful first half against England on 5 September.

Ireland have been getting beaten up physically and there were more missed Irish tackles at Twickenham than the team slipped off in this year's entire Six Nations.

We are missing that little bit of go forward and that's why I think it's so important Iain Henderson is in the team - but in the back row.

I would keep Devin Toner at lock alongside Paul O'Connell because in the back row you can use your energy a little more efficiently by carrying ball and making big tackles. That's what Henderson is good at.

Even though you can see he is trying very hard, Seanie O'Brien's form is not quite there yet after all his injury problems over the past couple of years and it is putting a big burden on Jamie Heaslip.

And with Peter O'Mahony coming back from shoulder reconstruction last season, the back row just isn't firing.

However, Henderson is a marauding force at the moment and we have got to get him in there alongside Seanie and Jamie and let him tear at teams.

In terms of the other main pack issue, I am hoping Cian Healy starts this weekend in the front row alongside Rory Best and Mike Ross because he really does need some game time after his neck troubles in recent months.

Simon Zebo's pace a plus for Ireland 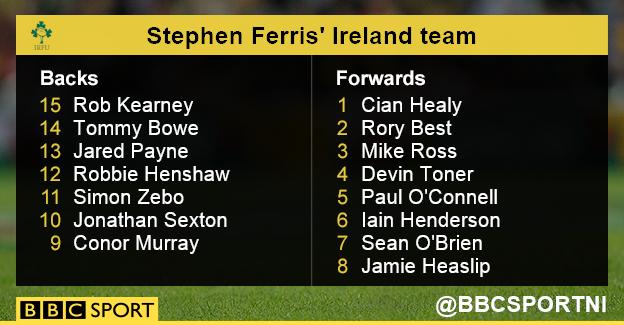 With regards to the backline, I would give Tommy Bowe another chance despite his stinker at Twickenham and start Simon Zebo on the other wing.

Hopefully, a more dynamic performance by the pack should see Johnny Sexton finally getting some front-foot ball after his comparative struggles against Wales and England.

Conor Murray should also start after being declared fit following his knock against England while I expect to see regulars Rob Kearney, Jared Payne and Robbie Henshaw in action at the Millennium Stadium.

Overall, we need the Ireland players to take plenty of responsibility during this campaign and not shy away from leadership roles when that is what is needed on the pitch.

All the focus seems to be on Joe Schmidt but I think our campaign needs to be player-driven as well.

Overall, with the phoney war now over, I am expecting Ireland to be much more accurate and dynamic on Saturday.

Canada, Romania and especially Italy may all not prove easy opponents but those games represent the kind of start you would want at a World Cup.