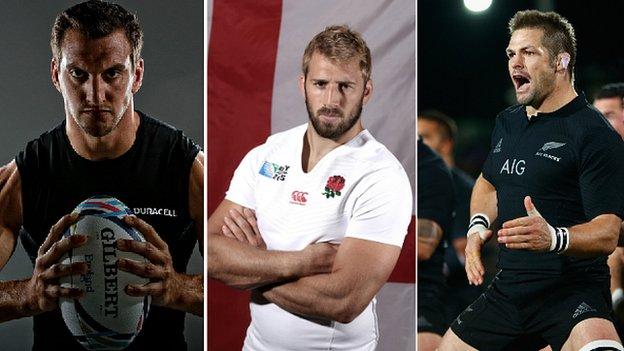 The Rugby World Cup is upon us, bringing a six-week festival of bone-crunching tackles, super-human power and breathtaking guile and pace to these islands.

But who will be crowned champions and who will take the breath away? Are defending champions New Zealand overwhelming favourites? Will hosts England survive the so-called 'group of death'?

How is your country going to do?

Jeremy Guscott: "Host nations invariably do well. Statistically they've always made the knockout stages and three times they've won it, albeit New Zealand have done it twice. South Africa in 1995 were the other home winners. On that basis alone, England should do well."

Jonathan Davies: "All the pundits have favoured Australia and England to get out of Pool A, but on their day Wales can beat anyone. Yes, we are third favourites but I still think Wales can shock one of those two and hopefully get through the group."

Gavin Hastings: "Realistically, getting out of the pool would be a good tournament. Scotland are a bit of an unknown quantity but they seem fit and strong and have a core of good players. South Africa will find it tough to play against Scotland, and we are capable of beating Samoa to get out of the group. I hope we play England in the quarter-finals at Twickenham!"

Stephen Ferris: "Ireland can definitely get to a semi-final, which would be an achievement in itself. But we need to up the physicality from our recent games."

Robert Jones: "Wales are still a threat despite the injuries. Liam Williams needs match practice but he is probably a more creative attacking threat than Leigh Halfpenny, and Dan Biggar is almost as good a kicker and has grown into a fantastic player. As long as we stay injury free now to the end of the pool stage, I think we still have a chance."

Mike Blair: "Scotland will make the quarter-finals but they will need to play well to get there as it's not just about South Africa and Samoa in Pool B. Japan and USA will be very competitive too."

Andrew Mehrtens: "Most players around the world would say they would like to beat the All Blacks more than any other team, so the All Blacks have that pressure and weight of history. Every team lifts themselves when they play them, because it is the biggest game of their lives."

Bobby Skinstad: "The Springboks are probably slightly under-cooked, with half a dozen players coming back from injury. They are possibly not quite at their best yet, but I think that helps them. The selection has remained consistent and they have leaders with huge character."

Denis Hickie: "Momentum is key. Ireland have to beat Canada well in their first game and build into it because everyone thinks it will come down to the France game. Ireland have won two and drawn two of their last four against them, so there is confidence based on what has happened in the Six Nations. The flip side is Ireland have lost all three games against France at World Cups."

Paul Grayson: "With a bit of luck, England can win it."

Can anyone stop New Zealand?

JG: "Yes. They won't be fully tested until the quarter-finals or potentially the semis, if they make it that far, so they will be vulnerable when they face their first real test."

JD: "The winner of Pool A will go to the final. Australia are looking very good and England will have home advantage if they go through. But for me it's still New Zealand."

AM: "Australia are on the rise. They beat the All Blacks pretty comprehensively in Sydney and have a good team culture. The coach Michael Cheika is earthy and passionate; he is a hard taskmaster but the players seem to love him. They are coming in with some real momentum and have some stars in their backline. If they get enough ball, they can go very well."

MB: "Yes. I believe that on their day England and South Africa could beat them, but the All Blacks are the strong favourites."

SF: "If you gave me money to put a bet on, I would put it on New Zealand. But I think the five or six usual suspects all have a genuine chance at winning the tournament and I would include England in that, even though I think it could go the other way with them perhaps not even making it out of their group.

"I really like South Africa's chances - the pack is so strong and rugby nowadays is all about the three Ps - pace, power, physicality."

Which team will surprise us?

JG: "Argentina have the potential to surprise France or Ireland in the quarter-finals - just ask South Africa, who the Pumas beat in the Rugby Championship."

JD: "Scotland will be the surprise package in their group and will go through. France will surprise Ireland."

GH: "Ireland, within themselves, will feel they are good enough to win this World Cup, and anything less than that, amongst the team, will be a failure. Not having got to a semi-final before doesn't make any difference to this current side. I think Ireland are capable of doing it."

MB: "It won't be a surprise as such but I think Ireland will have a strong tournament and will push the big guns along the way. It's crucial for them that they top their group, though, to avoid New Zealand in the quarter-finals."

SF: "Many people are writing Ireland off after their recent couple of lacklustre performances but I expect us to surprise a few people and to get back to the kind of form we have produced in the last two Six Nations and reach the semi-finals."

Who will be the star player?

JD: "Unfortunately for Wales, I think it's going to be Israel Folau. The Australia full-back is a class act. He is an amazing player who can cause damage against anyone. Depending on how far Australia go, he could be the player of the tournament."

PG: "When you have been the best in the world, you get to almost write your own scripts, and Dan Carter is the sort of guy who if New Zealand go well, he can elevate himself to the point where he could be sensational."

BS: "Israel Folau is probably the number one convert from rugby league with the athleticism he brings. He is just devastating on the counter-attack."

AM: "All Blacks scrum-half Aaron Smith. The speed of his pass dictates the tempo of New Zealand's game and gives Dan Carter the time and space to operate. Even if the defence has numbers, it means they are always on the back foot."

MB: "New Zealand's Nehe Milner-Skudder is incredible. His footwork and offloads are ridiculous. England wing Jonny May is looking electric too and, given space, he will do damage."

SF: "I am convinced that my former Ulster team-mate Iain Henderson is going to be one of the real stars of the tournament. South Africa's Duane Vermeulen will have a tremendous tournament and you can't expect anything other than Richie McCaw to round off a magnificent career by producing his usual brilliance for New Zealand and probably leading them to another World Cup triumph."

Will hosts England get out of their group?

JG: "Home advantage gives England a big edge. In addition, if Australia, Wales and England all beat each other, they will know what result they have to achieve in their last match against Uruguay."

JD: "If you're looking at it as a betting man, Australia and England are the two to get out of Pool A. Despite the setbacks with injuries, I still think Wales can shock one of those two and hopefully get through the group."

MB: "Yes. With home advantage, a strong squad and a couple of injuries to the Welsh squad, I think they will advance."

SF: "That's a tough one and I can see it going either way for England. But with the massive weight of expectation that they must shoulder and the pressure their media will put on them, I will plump for Australia and Wales, despite their injury blows, to get out of that group. But conversely, I won't be shocked if England make it all the way to the final."

GH: "I would much rather be an England player at this World Cup than any other. It will be brilliant to play in front of that support. There is no way they are going to think that is a negative. They will thrive off it and that can play to their advantage."