Georgia started their World Cup campaign with a hard-fought win over Tonga in Gloucester.

The meaning of the result

This result has wider implications with either of these sides hoping to finish at least third in the group in order to seal automatic qualification for the 2019 Rugby World Cup.

In a group including New Zealand and Argentina, the game was always going to be a key match for both sides. Tonga's hopes of progressing through to the knockout rounds for the first time were delivered a blow.

On the day Georgia scrum-half Vasil Lobzhanidze made history by becoming the youngest player in Rugby World Cup history (18 years and 340 days), his team-mates made a nation proud.

Lobzhanidze beat the record previously held by Thretton Palamo (19 years and eight days), and the scrum-half may look baby-faced but he more than held his own. The number nine plays for RC Armazi Tbilisi in Georgia and on today's evidence looks set for a bright future.

For Georgia, who came agonisingly close to beating Ireland in 2007 before eventually losing 14-10, this was a result of huge significance. While that performance against the Irish announced them on the world stage, this victory sealed their place in history. 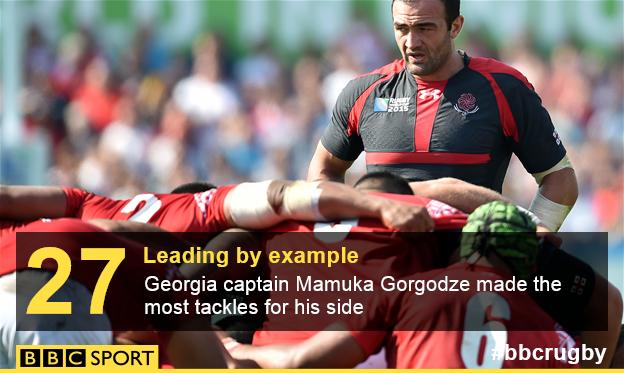 There are few better sights in world rugby than back-row forward Mamuka Gorgodze charging at opposition forwards. The Toulon man, nicknamed Gorgodzilla, was in typically-rampaging form at Kingsholm, scoring his side's first try and was an inspirational figure as they held firm for victory.

"The TMO is there, and I think we could have more challenges - I don't think we are losing anything.

"Everything was shown in the first game last night (between England and Fiji), and I don't see anything wrong with that."

"Today was pretty historic for everyone involved in Georgian rugby, and we are very pleased.

"This is the best-prepared side ever to leave Georgia, and today we showed that. Fitness-wise, we were able to sustain our defence over 80 minutes, and that allowed us to come away with the win."

Reaction to the result