Wales centre Cory Allen is set to miss the rest of the World Cup after injuring his hamstring in the opening 54-9 win against Uruguay.

Props Samson Lee and Paul James have calf concerns and Aaron Jarvis is also a worry. Head coach Warren Gatland says he may have to call up front-row cover.

Allen scored a first-half hat-trick but was taken off in the second with a "significant" hamstring injury.

But full-back Liam Williams' thigh injury is not thought to be serious. 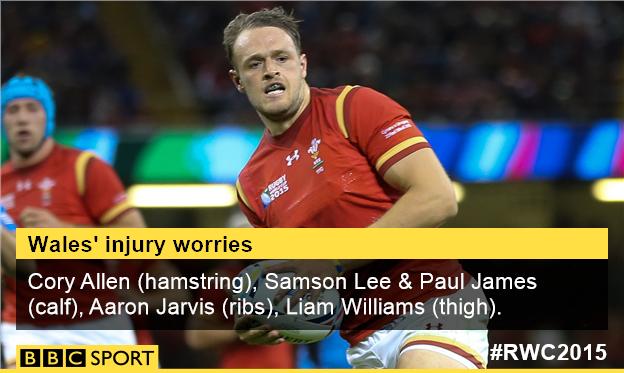 Flanker Dan Lydiate was also taken off to be assessed for a head injury, but the British and Irish Lions player passed the head injury protocol tests.

"It looks like Cory has a significant tear in his hamstring and it looks at this stage like he'll have to be replaced," said Gatland.

"Liam had a knock on the thigh but it's too early to see for next week. We'll have to wait 24 hours to make an assessment."

Gatland added tight-head Lee and loose-head James are both struggling with "tight calves", while Jarvis damaged a rib cartilage.

"We may have to make a tough decision in terms of the props, because we have to have five props," said Gatland.

"At the moment we've only got three that could take the field and we have to have four."