Scotland ran in five second-half tries as they opened their World Cup campaign with victory over Japan at Kingsholm.

Greig Laidlaw's four successful penalties out of five gave the Scots a 12-7 advantage at half-time, Amanaki Mafi having crossed for Japan.

John Hardie and Mark Bennett touched down after the break and Tommy Seymour raced clear for the Scots' third try.

Japan had caused a major upset when they beat South Africa 34-32 on Saturday but, despite a spirited first half, they were overwhelmed by Vern Cotter's side, who now top Pool B.

Mafi scored after a successful line-out and Ayumu Goromaru converted but that 7-6 advantage would be Japan's only lead in the match as Laidlaw largely kept his composure with the boot before the Scots fully took control.

Some of the attacking rugby Scotland produced was sumptuous. They did it against a team that was tiring but there was pace and wit in the backline and a reason to believe big things are to come. 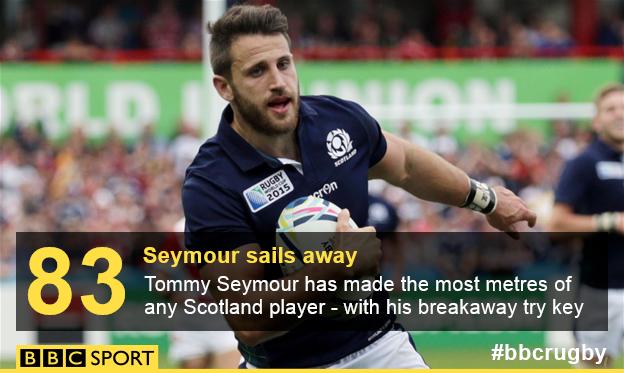 Bennett and Matt Scott were outstanding, cutting through the Japanese defence and causing mayhem.

Scotland have often toiled miserably when it comes to breaking down defences, but not now.

In Bennett and Scott in the midfield, the electrifying Stuart Hogg at full-back, the predatory Seymour on the wing and such cleverness at half-back in Russell and Laidlaw, Scotland are not lacking in game-breakers anymore.

The game turned when Japan suffered the cruel loss of their totem Mafi to injury early in the second half.

The back row forward had been a colossus. As soon as he was carried off on a stretcher, Scotland ran amok.

When he departed it was still just a two-point game and Scotland were beginning to wobble.

His exit had the twin impact of demoralising Japan and galvanising Scotland. Eddie Jones's team quickly tired and they were picked off relentlessly and clinically.

Hardie and then Bennett found gaps on Japan's right for Scotland's opening two scores and the pace of Seymour and Bennett left opponents trailing in their wake as the bonus point was secured.

Russell added gloss to the scoreline under the posts, with Laidlaw converting four of the five tries.