With Jonathan Joseph out, Williams is looking forward to Sam Burgess's midfield battle with his Wales rival.

"It could be World War Three in the middle there with Sam Burgess and Jamie Roberts," said Williams. 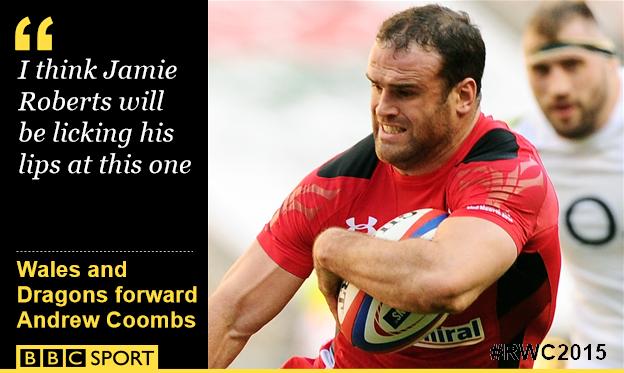 However, the former Ospreys wing says he is an admirer of Joseph and admits he has "a smile on my face that he's not involved" at Twickenham.

Williams, who played on three British and Irish Lions tours, said: "Sam Burgess is getting better every game he plays rugby union.

"He's learning the game very quickly and this could be a massive game for him up against a player of similar stature and physicality, Jamie Roberts.

"I feel a little bit for Ford. I feel he's a great player.

"He had a fantastic Six Nations; didn't particularly do anything wrong on the weekend against Fiji.

"However, I think Lancaster's looking at the physicality in that midfield.

"Perhaps he's thinking that Jamie Roberts or Scott Williams are looking to run down that 10 channel and perhaps he believes Owen Farrell's a better defender.

"So, yes, a strange decision for me, I would have gone with Ford.

"However, two very good players are coming in and it's probably not going to change the balance too much for Wales."

Williams said the injuries that have struck Wales with scrum-half Rhys Webb and Lions stars Leigh Halfpenny and Jonathan Davies ruled out have undermined their cause.

They also lost centre Cory Allen to a hamstring injury suffered in the opening 54-9 win over Uruguay and have injury concerns over full-back Liam Williams and props Samson Lee, Aaron Jarvis and Paul James.

Williams also pointed to England's strong 2015 Six Nations showing, including beating Wales 21-16 in Cardiff in their opener, as evidence of their progress under Lancaster.

But Williams believes the pressure of playing at home and having failed to sparkle in the tournament opener against Fiji, despite winning 35-11, can benefit Wales.

"I think all the pressure's on England - they have to perform," said Williams.

"It wasn't their best performance against Fiji… and I think Lancaster's under a bit more pressure than [Wales coach] Warren Gatland.

"So for that reason, I do think Wales can sneak it."