Canada threatened to pull off a World Cup shock but were denied by Italy in a thriller at Elland Road.

The Canadians dominated after the break and Matt Evans crossed to deservedly restore their advantage.

But Gonzalo Garcia's try edged Italy ahead once more and they held on despite heavy Canadian pressure and Nathan Hirayama's penalty.

Victory would have been Canada's eighth in 26 World Cup matches but they were unable to add a finishing touch despite enjoying 59% of the possession.

Italy, beaten in their opening match by France, next play Ireland in Pool D on Sunday, 4 October. 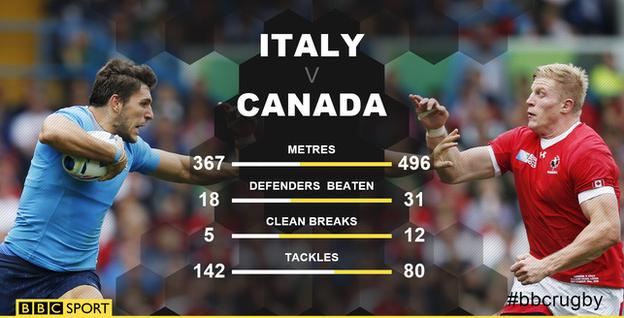 Canada dominated the attacking stats after their exhilarating, albeit ultimately fruitless, second-half display in Leeds.

The only stats Italy led in were defensive ones, and also the only one that truly matters - on the scoreboard.

Replacements: Campagnaro for Benvenuti (59), Palazzani for Garcia (73), Aguero for Rizzo (46), Giazzon for Ghiraldini (59), Castrogiovanni for Cittadini (46), Fuser for Geldenhuys (79), Bergamasco for Vunisa (57). Not Used: Canna.