Wales overcame a 10-point deficit and endless injuries to pull off a sensational win against England in an astonishing World Cup contest.

This is a devastating loss for England, for whom Owen Farrell kicked 20 points.

Jonny May scored a first-half try for the hosts, who turned down a tricky late shot at goal and paid the price.

When England led 22-12 with half an hour to play they looked to be in control, but the concession of a series of penalties, many at the breakdown, kept Wales in the game, and in a blistering finale it was the men in red who found the resolve to come through.

England will now have to beat Australia next Saturday to keep their own World Cup campaign alive.

The late call - was it right?

England could have snatched a draw at the death, but captain Chris Robshaw opted to kick to the corner rather than take the difficult pot at the posts, and when Wales pushed the subsequent maul into touch the chance had gone.

It was a decision that may be endlessly debated but in truth England lost the game through their own indiscipline.

Stuart Lancaster's controversial team selection was arguably justified by an assured performance from Farrell, who was picked at fly-half ahead of George Ford.

But his reputation as a coach now hangs on the result of the Wallabies showdown in a week's time, the doomsday scenario of England becoming the first World Cup hosts to fail to make it out of the group stages now a real possibility.

After an early exchange of penalties in a frantic, breathless opening, England took the lead for the first time when Farrell's wobbly drop-goal attempt limped over to make it 9-6.

The Welsh set-piece was a mess, hooker Scott Baldwin struggling to find his men at the line-out and their first two scrums lost as Dan Cole got the better of Gethin Jenkins.

And it was England who began to take control, punching runs from the forwards sucking in the defence to create space out wide for Mike Brown before the irrepressible Ben Youngs spotted space down the blindside and sent Jonny May away for the try.

The home side were in control, only for the otherwise excellent Farrell to miss touch with a penalty and lose both the opportunity to attack the Welsh line-out deep in their half and the game's momentum with it.

Scott Williams' stepping, scything run took Wales down the other end and Biggar's third penalty of the half kept his side within seven points at the interval.

But gutsy Wales fight back to win

Farrell's third penalty stretched the lead to 19-9 but Wales were starting to fire.

Keeping the ball in play to take the set-piece out of the equation, they began to win the breakdown battle as England's penalty count climbed.

Biggar's faultless kicking narrowed it to a four-point game with 20 minutes remaining and with men limping off on either side as the ferocity of the contest told.

As the moments ticked by chaos took over, the play broken, the bodies piling up.

Then the match - and the World Cup for these two teams - turned on a moment of improvised inspiration.

Wales went wide, Jamie Roberts found Lloyd Williams down the left and the replacement - normally a scrum-half but forced into duty on the wing because of injuries - kicked cross-field as the defence closed in on him to find Davies away in front of the posts.

That made it 25-25, and when England were penalised again at the breakdown Biggar landed his finest kick of the night from just inside halfway to steal a famous win.

Dan Biggar was flawless from the tee all night long, landing seven penalties from seven attempts spread across the field and setting up a try that will be long celebrated in Wales. 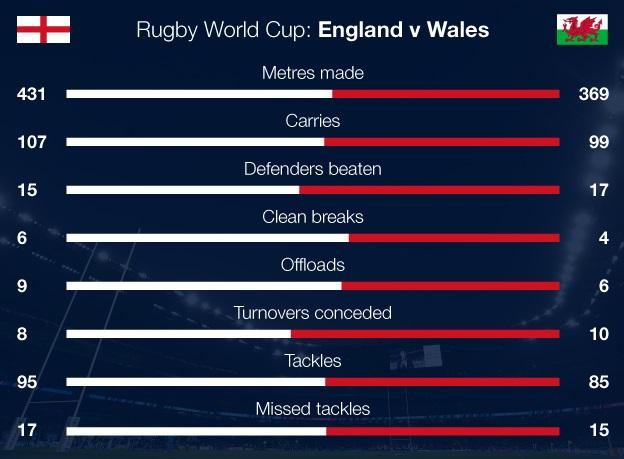