The youngest forward to feature in that inaugural World Cup in 1987 was Cristian Raducanu at the age of 19, and the Romanian is still the third youngest to play in the pack in the event's history.

But two years after making history in New Zealand, Raducanu grasped the opportunity afforded to him as a rugby union international to escape Nicolae Ceausescu's Communist regime.

The dictator was overthrown just a few months later, but not before Raducanu's 1987 World Cup captain Florica Murariu had been killed by an army patrol.

The stories of Murariu, Raducanu and Romanian rugby have particular poignancy as the country competes in its eighth World Cup.

Two years after the inaugural World Cup, Raducanu travelled to Edinburgh to represent the country against Scotland.

It was 9 December 1989, and Raducanu played at Murrayfield with the knowledge he was likely to make a life-changing decision later that day.

"It had been in my mind the whole trip," said Raducanu.

"We had been at the post-match function for two or three hours. I had drunk a few beers. That probably gave me more courage to act.

"We were travelling to London the following day. At about midnight I thought 'now is the time'.

"I walked out of a side door of the hotel into Princes Street. All I had were the clothes I was standing in; my blazer, tie and official rugby banqueting kit and the equivalent of £40 in my pocket.

"Sat at some traffic lights was a police car with two officers inside. I opened the door. I told them who I was and what I had done that day. I told them I wanted to ask for political asylum. Their first question was 'Are you drunk?'."

Raducanu's route to defection, made possible by the travelling he did as a rugby international, began when he made his debut for Romania aged 18 against Italy in 1985.

Almost three decades on, the memories are still fresh.

"It was like Yorkshire when the Tour de France came, or England in Jubilee year. A complete rugby frenzy," he said.

"People eat, breathe and sleep rugby in New Zealand. You couldn't go into any shop with a rugby top on without someone asking for your autograph. You couldn't walk the streets without people taking pictures."

Romania won their first match, edging out Zimbabwe 21-20, before losing out to France and Scotland.

Romania's rugby players were not alone on that New Zealand trip.

Still under the grip of Communist leader Ceausescu, the squad were joined by additional members prior to departure.

"We didn't feel any political pressure within the squad but when the team were preparing to go somewhere like New Zealand, two or three people we had never seen before would also come as assistant physios or news reporters," said Radacanu.

"They were obviously people who would supervise what everyone was doing.

"They would mind their own business. They didn't interfere with anything we did and we were used to it, so we carried on as normal. It didn't stop us going out for a few nights in New Zealand, put it that way. "

The catalyst for his decision

Raducanu returned home after the World Cup and got married.

The birth of his daughter on 2 November 1989 was the catalyst for his life-changing decision.

"We wanted a better future for her than the one Romania could offer," he said.

"We were concerned about the future for my daughter being brought up in the heavy Iron Fist regime. You couldn't step out of the fray. You had to follow the rules. You couldn't express yourself.

"Before the trip to Edinburgh, I talked it over with my wife. Nobody else knew about it. Not even my mum and dad or my wife's parents.

"That night at the banquet I just thought, 'I am doing it'."

His wife acts the part

Eighteen hours after his dramatic exit, Raducanu was in the care of the Scottish Refugee Council.

The state officials escorting the team had not gone to the banquet so Raducanu's disappearance did not come to their attention until the Sunday.

Back home in Bucharest, Raducanu's wife was beginning a charade.

"She found out from an illegal Romanian radio station broadcasting from Germany that I hadn't made the trip back with the rest," he said.

"She came to pick me up at the airport and had to pretend she didn't know.

"She made a scene, claiming furiously I had left her with a two-month-old baby. It was all a show, but if we hadn't done it she would have been in trouble.

"I found out afterwards my team-mates were all pulled in one by one by security. They had to make a written statement and submit to an interview to tell them what they knew."

The tragedy of Murariu 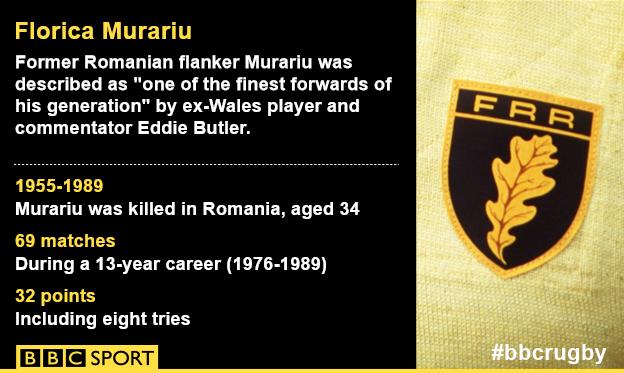 Raducanu's wife happened to pick up Florica Murariu on her way to the airport.

Murariu was another member of Romania's 1987 World Cup squad, one of the finest forwards of his generation who scored eight tries in 69 Tests for his country.

He had missed the Scotland game through injury but wanted to greet his team-mates on their return.

Fifteen days later he was dead, aged 37. A victim of the violence that spread throughout the country from mid-December and ended with Ceausescu's execution.

"He was coming home from a party in the middle of the night and was approached by a night security patrol from the army," said Raducanu.

"They asked for his ID. He argued with them and said they should know who he was. When he realised he couldn't win the argument he put his hand inside his pocket to show his ID.

"One of the soldiers thought he was taking out a gun and shot him. It was truly tragic but those army patrols were youngsters, bullets were being fired, bombs were exploding, it was 4am.

"It happened outside where he lived. His wife ran out to try and resuscitate him but nothing could be done."

After his escape, Raducanu feared he would be found by Romanian secret police, lifted off the streets and never seen again.

But unfolding events back home helped complete his escape.

"It was a proper street-fight revolution and there was a general state of confusion," he said.

"For a few days no-one knew who was shooting at who. Hundreds, if not thousands, lost their lives. In the meantime my case was virtually forgotten.

"The phone taps had gone so I was able to speak to my wife daily.

"We were apart for six months before she was granted a medical visa because my daughter developed a lump in her throat."

His family joined him and Raducanu enjoyed a decent rugby career, first in Scotland with Boroughmuir, then in England with Leeds, Sale and Sedgley Park among others.

He remains in Yorkshire where he manufactures furniture, some of which is exported back to his homeland.

"I do reflect but I don't regret what I did," he said.

"I have loved every minute of being in the UK. I have lived here more than I was in Romania. It is our home.

"But it was a hell of a ride - defecting, police cars, then the revolution."