Henry Pyrgos is ready to make the most of what could be his only chance to captain Scotland at this World Cup.

Fellow scrum-half Greig Laidlaw was Scotland's man of the match in their opening Pool B win over Japan.

But Pyrgos takes over as skipper as head coach Vern Cotter rotates his squad against the USA on Sunday.

"Greig had a great game on Wednesday, but I'll focus on my role and do it to the best of my ability," said the Glasgow Warriors 26-year-old.

"I just look at it like it's a great opportunity.

"Hopefully, we get the right result." 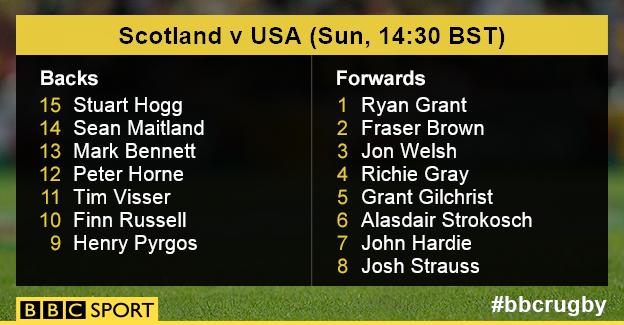 Pyrgos led Scotland in a World Cup warm-up defeat by Ireland last month and will be determined to retain his place.

However, Laidlaw is almost certain to return for the potentially decisive meeting with South Africa in Newcastle a week on Saturday.

"I knew coming in that was how it was going to go," added Pyrgos.

"It was amazing to lead the team out against Ireland and again it's a huge honour to captain Scotland at a World Cup.

"I know how much it means to the country and I'm really excited.

"I'm not sure how I'll feel when I get out there, but it'll be a big moment for myself and my family."