Coach Warren Gatland has warned Wales' stars he will drop them from Thursday's World Cup game against Fiji if they lack intensity at training.

Wales stunned England 28-25 at Twickenham and would be on the brink of the last eight if they beat Fiji.

Gatland says the players had "a bit of a rocket" because training on Tuesday was "a bit lighter".

"I said 'if I see any body language or anything that's not right, I will change you'," said Gatland.

At full-back, Matthew Morgan steps in for the concussed Liam Williams while recalled James Hook is on the bench.

Gatland says concerns about the five-day turnaround after winning in dramatic fashion in the biggest pool game to date are more a mental than physical.

"You get a massive high from that [England win] and you've got to make sure that sometimes the challenge is not the physical challenge but the mental challenge," said Gatland.

"That's our job as coaches to make sure they're ready for that mental challenge." 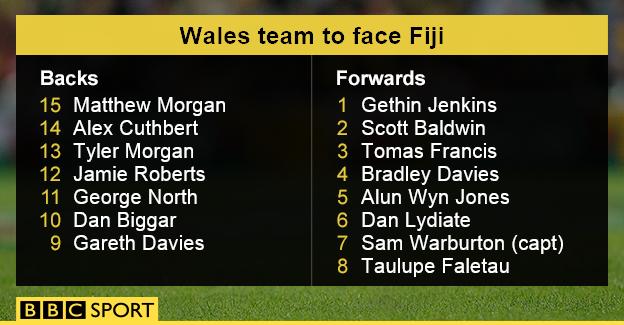 Flanker Dan Lydiate has been named to win his 50th Wales cap and says Gatland wanted a "low-key" Tuesday morning session with more intensity later in the day.

"He said that if anyone walks round the pitch thinking they can take it easy, they will suffer the consequences.

"He said that if anyone was brave enough to test that theory, then to go ahead. I was like, 'all right, I will be flat out this afternoon'."

Lydiate added: "Everyone is on their toes every selection, and that is the best way to be."

Wales are second in Pool A behind Australia and will lead the group if they beat Fiji. Third-placed England host the Wallabies on Saturday.

Fiji lost their opening two games to England and Australia.