Pool A looked like it would be a titanic tussle as soon as it was drawn way back in December 2012.

So it has proved. After their defeat by Wales last weekend, England know that a loss to Australia will leave them as the first hosts to fail to make it out of the pool stage in the tournament's 28-year history.

So what can we expect?

Looking for a new England

England have to change their tactics for this match. Not slightly, not dramatically, but entirely.

Australia effectively play with two open-side flankers with Michael Hooper and David Pocock in their back row. Both are breakdown specialists. They will exploit any opportunity to steal ball and, at worst, will slow down England's recycling and force them to commit extra men to rucks.

England have to nullify the breakdown and take it out of the equation as a possible match-winning factor.

They have to play a set-piece game and reduce their ball carrying to a minimum. There is an argument that England should not run the ball at all inside their own half.

When England do carry, it should be in areas where the rewards are greatest and the risks are smallest.

A clean break on the Australia 22-metre line may well result in a try. If they concede a penalty or turnover in that part of the pitch it is not catastrophic.

They should focus on keeping the ball off the floor as well in the collision, giving their support time to get to them and protect the ball from Pocock and Hooper.

By playing those percentages and forcing them into a kicking game, England can keep Australia's jackals out of the game.

If England play that way then outside centre Jonathan Joseph - back after a chest injury - may not see much of the ball.

His team-mates can help maximise his threat when he does, though, by putting the ball in front of him to run onto.

Sometimes Joseph can be a little stand-offish, but if he is forced to run onto the ball he has to use his instinct at pace.

Suddenly he has options - continuing on to find a gap, changing angle or check back inside to throw the defence off balance.

Australia will be well aware of the danger he poses. Tevita Kuridrani, opposite Joseph, is big and quick, but he has not fired on all cylinders yet in this tournament.

Survival of the fittest

England need to use their defeat by Wales to their advantage.

It was a game against their fiercest rivals that they dominated at times and lost on very small margins. They could easily have won.

England have to feel the hurt and pain from that loss, have it simmering in the background, but keep it under control. It cannot envelop you.

The knockout stages have come a week or two early for England, but they have to live in the here and now.

When I was playing in the 1991 World Cup, we lost our opening match to New Zealand. It was not as strong a pool as this England team is in now, but it set us on a tricky path to the final. 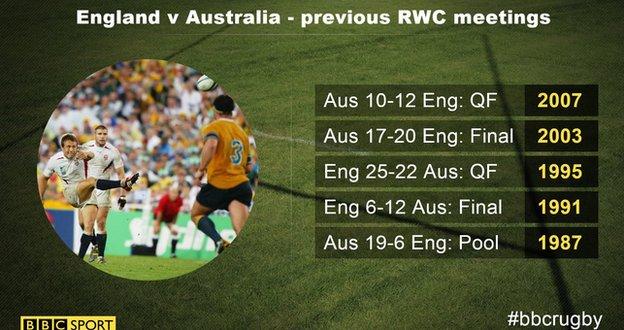 But we beat both France and Scotland on their home grounds to make the final.

This England team have to get their head in the right space. After all the build-up and so much preparation, they will know what they can and cannot do physically and where their strengths are. They have to focus on that and not be cowed by last week's result.

All teams have bad periods and bad results. It is how you survive them.

Anybody who has played sport at that elite level understands that decisions are made on the pitch and that that is the burden and responsibility of certain individuals. The time to review them is after a World Cup, not during it.

The captain was the only decision maker in most of the teams I played in. His say was the one that mattered in all areas. There was a time when we were playing Scotland in a Grand Slam decider in the Five Nations in 1990 when Brian Moore got a bit carried away with himself - telling the referee what we were doing without consulting captain Will Carling - but that was the only time I saw that.

It is only a little over 10 months since England beat Australia by nine points in their autumn international at Twickenham.

That game summed up where the weaknesses are in this Australia side.

They had more possession, more territory and made more than double the number of metres England managed, but still lost by more than a converted score.

Although they backed themselves with the ball in hand, that comes with risks.

Australia conceded 16 turnovers to England's nine and offered up 12 penalties to England's seven. The Wallabies gave away four penalties at the scrum while England didn't concede any.

England were clinical that day and capitalised on the mistakes that Australia back themselves not to make in executing their adventurous game plan.

Lancaster's men kicked twice as much as Australia that day out of hand. They had a tactic to beat the Wallabies and executed accurately and the same is required on Saturday.

Australia have the edge at the breakdown with Hooper and Pocock. They have possibly the best attacking full-back in the world in Israel Folau and they have some fantastic rugby brains in Adam Ashley-Cooper and Matt Giteau.

But, despite recent improvements, I do not believe their scrum and line-out are as strong as England's and overall, man for man, England shade it for me.

Australia as a collective do have an advantage though. After winning their first Rugby Championship in the summer - defeating the All Blacks - they are full of confidence and have been eased into this tournament with fairly straightforward wins over Fiji and Uruguay.

Coach Michael Cheika, who led Leinster to their first Heineken Cup trophy in 2009, invariably gets the best out of every team that he takes charge of.

It is so close, but I can see England winning by a single score.