When Matt Scott was asked about the aura of the Springboks before a seismic game at St James' Park on Saturday, the Scotland centre managed to walk the fine line between courtesy and chutzpah.

He paid tribute to the legend of the Bokke - their two World Cup wins, their strength in depth and their monstrous 40-point awakening against Samoa after the horrors of Japan - while at the same time saying that their reputation will count for nothing when these teams start battering each other to a pulp in front of a Newcastle crowd that will be heavily lopsided in Scotland's favour.

"They're just 15 guys," said Scott of the South Africans.

"You can't put them on a pedestal. They're just like any other team. We'll detach the Springbok aura and analyse them as human beings."

And there's much to analyse in this World Cup match, on both sides. The Springboks have picked a side that is as close to full strength as makes no difference.

Scotland, on the other hand, have ripped up the starting team that beat the USA, some changes by necessity, others by design with an eye on Samoa in a week's time.

They are between two worlds right now; they'd like to beat South Africa, but they simply have to beat Samoa.

Scott is part of a midfield combination - with Richie Vernon - that has played the sum total of 68 minutes together in the centre.

They are playing behind a fly-half, Duncan Weir, who has started one Test match in 15 months, and behind a front row of the scrum that boasts 27 caps compared with South Africa's 210 and a Scottish back row that has 44 caps as opposed to the Springbok three, who boast 149.

In experience terms it's a rout. In their isolated pockets of success against the Springboks in recent times, Scotland have always gone in with a full metal jacket approach, with all their best players on the park, but are now trying to do it with depleted resources.

The team, and the management, rail against the notion of this being a second-string Scotland, but it is. It has to be. Three games in 10 days is a murderous regime, especially when your fourth is the biggest one of all. Key men need some breathing space before Samoa. That's the reality of squad management at a World Cup.

Only seven players who started the opening 45-10 win against Japan will start again on Saturday. Only four who faced the Americans from the beginning have been picked again. Mark Bennett, Finn Russell, Sean Maitland - all gone for different reasons.

The rock-like Alasdair Dickinson is on the bench. His replacement, Gordon Reid, has never started a tournament Test. John Hardie is missing again from the 23. His place in the team goes to Blair Cowan, who wasn't even in the original 31-man squad.

This will be a momentous occasion but it's also a mountainous task facing Scotland.

Springbok lineout - where it all happens

It doesn't seem to matter what combination of second rows South Africa deploys, they always seem to have the same untouchable quality out of touch.

Victor Matfield and Eben Etzebeth or Pieter-Steph du Toit and Lood de Jager or any combination of the four seems to produce a torrent of quality line-out ball on their own throw while inflicting a world of uncertainty on the opposition throw. 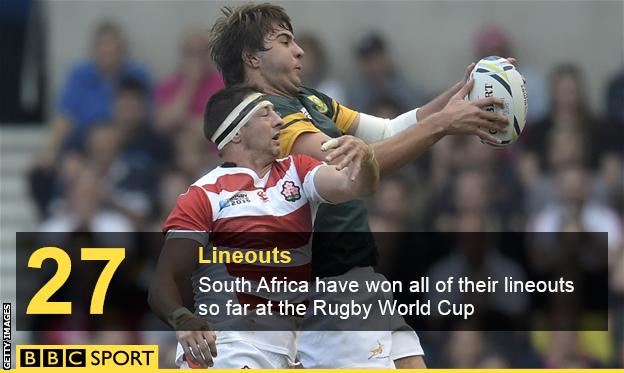 It's the launch-pad for everything they do. The beginning and end and in-between of their game-plan.

Against Scotland it's the 23-year-old phenomenon Etzebeth and the equally remarkable 22-year-old De Jager who team-up, with Du Toit on the bench and Matfield in the stand, injured. De Jager has played 14 Tests and has already scored four tries - two of them against Scotland in Port Elizabeth in the summer of 2014.

Nobody expects South Africa's line-out to miss a beat in Matfield's absence. As Jonathan Humphreys, the Scotland forwards coach, put it on Friday: "They have brilliant young locks. They seem to pull them off a conveyor belt."

South Africa have had 27 line-outs at this World Cup and have won all 27. Stretch it back another two games and their stats read 52 line-out wins from 54.

This is a double-edged weapon, of course. They dismantled Samoa's line-out last week, stealing six of their throws while also rendering the ball they did manage to win fairly useless. Samoa were under so much pressure that they could launch nothing off their set piece.

The same went for South Africa's revenge mission against the Pumas in the Rugby Championship. Having lost to Argentina in Durban in August, they turned around and beat them in Buenos Aires a week later and they did it, in part, by stealing 40% of the Pumas' line-out ball.

"There's been a talk of them changing their line-out calls," said Humphreys. "I don't think it's possible to change your complete book of line-outs in a week.

"Their lineout is very, very effective, it's very simple, so whether they have changed or not, I don't know. It's not something we have talked about. It's about doing what we need to do and if they have had some disruption, then great.

"We have to stop them turning that lineout into a line-out maul, though. They have probably the best line-out maul in world rugby."

The devastation of the Springbok maul

South Africa have scored three tries off driven line-outs at this World Cup, so Scotland have been warned. Not that they need warning. This is hardly a secret weapon that the Springboks are packing. As a threat it's obvious but how to stop it is a conundrum that will have tested the combined wisdom of the Scotland management to the max.

"Their maul attack is the most potent in the world," said Humphreys. "You have to be extremely physical in those areas and if you're not then the game can quickly get away from you.

"I don't think there is any magic formula for stopping a maul. It's about being legal, trying to get there early and disrupt what they are trying to do. There are a variety of strategies you can adopt. We take a lot of pride in being very physical."

By his own admission, the line-out is an alien world to Scott, but the consequences of Scotland failing to disrupt the South Africans will soon be visited upon him by way of a bullocking forward coming at him or a blur movement in the shape of Jesse Kriel or Damian de Allende, his opposition in the midfield, or any number of other game-breakers in that Bok backline.

Of the line-out battle and the quest to stop the Springbok maul, Scott concludes: "That's the game right there. The forwards are going to have an extremely tough day at the office and as a backline we have just to help them out as much as possible.

"That means making our tackles and putting them backwards. I know from playing the Springboks that when they have that maul rumbling and have big players coming at you on second or third phase it can sometimes be too much to stop.

"They're going to come out of the traps quickly and we have to start well. They have to win, but I don't think there's much chance of them being stifled by the pressure. Two teams will go hammer and tongs. It will be a brutal encounter."

For Scotland, a reason to believe

Vern Cotter's team are 13-2 to win, South Africa a virtually unbackable 1-8. The odds layers can see only one winner.

The Springboks' recovery from the nightmare of Japan was a thunderous one, but their diehard supporters need more evidence of a renaissance before they fully buy into it. After all, South Africa have still lost five of their last seven games.

Duane Vermeulen, the hulking number eight, spoke about this on Friday. "It's definitely a thing we need to work on," he said.

"We still haven't figured out what the problem is. Is it fatigue? Is it lack of effort. I don't think so. I think most of it comes down to discipline."

South Africa can be a devastating force when things are going their way, but if Scotland can stay with them then nerves and that strained discipline under pressure could yet play a part. In two matches in this World Cup they have conceded a whopping 27 penalties.

"If you've lost your first game then every game is a knockout game," said Humphreys.

"If things don't go your way, if you're not getting what you want early in the match, then the more the pressure mounts."

Piling the heat on South Africa and hoping they wilt in the endgame is Scotland's plan, but to get to that point you suspect they're going to need to deliver close to the game of their lives.