Georgia overcame a scare to defeat battling Namibia at Exeter and all but book their place at the 2019 World Cup.

Namibia led at half-time in a World Cup game for the first time after two penalties by Theuns Kotze.

Georgia were guilty of too many handling errors in a first half that lasted 68 minutes in real time.

However, they scored two tries after the break through Mamuka Gorgodze and Lasha Malaguradze to help seal victory before Kotze went over for Namibia.

While that try earned the Africans their first ever World Cup point, the result lifts Georgia, who have eight points, above Tonga into third place in Pool C. 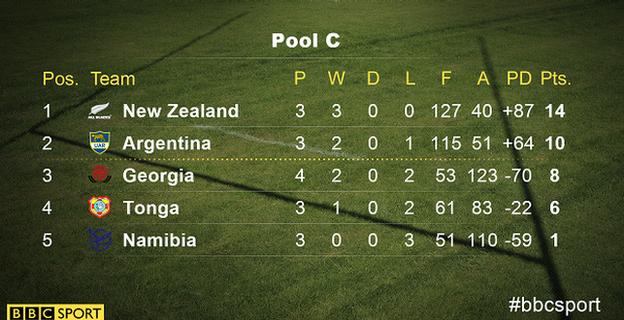 Georgia have completed their programme, while Tonga, who are two points behind, finish their schedule against world champions New Zealand in Newcastle on Friday.

They must now beat the All Blacks - an upset to rival Japan's win over South Africa earlier in the tournament - to deny Georgia an automatic place in Japan in four years' time.

Georgia celebrated at the final whistle as though they had won the tournament, but it was more out of relief than anything else.

In addition to almost certainly booking their place in Japan, the result means they have won two games at a World Cup for the first time.

Milton Haig's team were nervous from the start and made an astonishing number of errors before Gorgodze settled them down with the first try.

They were dangerous on the flanks but spilled too many balls and their mistakes helped keep Namibia in the game.

Namibia, the lowest ranked side at the tournament, were playing for pride.

Yet they were ahead through the boot of Kotze inside two minutes and found themselves in unfamiliar territory with a 6-0 interval lead.

The Africans produced a brave defensive display but three yellow cards - Raoul Larson, Johannes Coetzee and Renaldo Bothma all went to the sin-bin - did not help their cause.

There was jubilation among their support when the impressive Kotze went over in the closing stages to set up a grandstand finish - and earn Namibia a historic losing bonus point for finishing within seven - but Georgia held on to make history of their own.