Northampton boss Jim Mallinder says he has ambitions to coach at international level in the future, but is now concentrating on Saints' new season.

Following England's World Cup exit, the 49-year-old has been linked to the head coach role held by Stuart Lancaster.

"Some way down the line I would like to coach internationally," he told the Gloucester Citizen.

However he added in an interview with the BBC that "at this moment in time, Northampton Saints is my focus".

Lancaster has a contract until 2020 but is under pressure after defeats to Wales and Australia in Pool A ensured they became the first host nation to fail to make the knock-out stages of the tournament.

Mallinder took over Northampton in June 2007 in the wake of their relegation to the Championship. He led them back to the top flight at his first attempt and the Saints have finished as Heineken Cup runners-up in 2011 and Premiership champions in 2014 under his guidance. 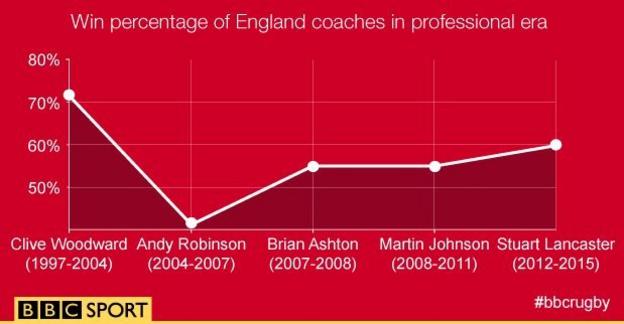 His contract as director of rugby at Franklin's Gardens runs until 2019.

"As an Englishman it is really disappointing to see what has happened," the 49-year-old told the BBC.

"It has been a tough group, but you would always want to come through and make the quarter-final. Clearly something has gone wrong.

"I have my personal views. You hear and talk to people and see what has happened yourself, but I think that is best coming from the people who are directly involved."

Exeter's Rob Baxter has joined Bath's Mike Ford in ruling himself out as a possible replacement for Lancaster.

"A little while ago I sat down with Tony Rowe, negotiated a new contract and shook his hand. As far as I am concerned that is a done deal."

Ford, who has been installed as favourite to succeed Lancaster by bookmakers, said on Wednesday that he would be "stupid" to leave Bath for a job that was "not right for me at this moment".

No need for Robshaw to apologise - O'Shea

Harlequins director of rugby Conor O'Shea says that England captain Chris Robshaw has no need to apologise - as he did in the wake of the 33-13 defeat by Australia.

"I rang Robbo yesterday and told him to stop apologising," O'Shea said.

"I told him to be proud of what he has done, he has not let anyone down.

"He will always be England captain in my book.

"There will be a clamour, they will be looking for scapegoats. I said before the tournament he will either be knighted or Guy Fawkes, that is the spectrum you deal in."